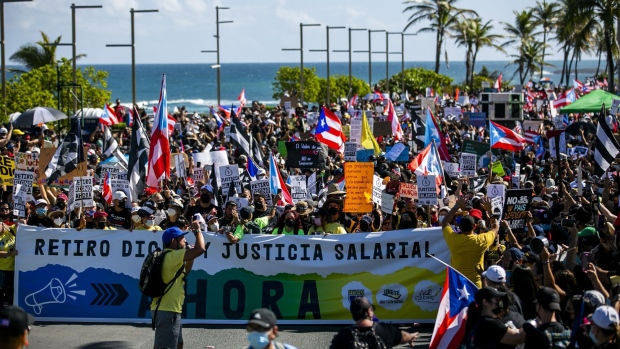 American and Puerto Rican flags fly outside the Capitol of Puerto Rico building in San Juan, Puerto Rico, on Saturday, May 13, 2017. With Wall Street's help, the U.S. commonwealth borrowed tens of billions in the bond markets, only to squander much of it on grand projects, government bureaucracy, everyday expenses and worse. Debts were piled on debts, even as the economy gave way. , Bloomberg

(Bloomberg) -- Mutual funds are pouring back into Puerto Rico debt, a notable comeback for the US commonwealth that’s exiting the biggest ever municipal bankruptcy after five years and that still struggles with an uncertain economy bled by population loss.

Island officials are trying to make sure investors don’t leave. Puerto Rico is hosting its first annual event for bond holders since before its bankruptcy in 2017, hoping to show that it’s put an end to the runaway deficits that drove it into ruin and locked it out of capital markets. Among its selling points: a sharply reduced debt load that’s giving it a fresh fiscal start.

Mutual funds run by big-name firms like Nuveen and Invesco have been buying the island’s bonds because of the high yield they offer and the tax advantage the debt carries. This time though, the funds are going in with the knowledge that a federally-appointed financial oversight board -- despised by territorial residents as a vestige of colonialism -- will ensure that bondholders get repaid.

At the two-day conference, commonwealth officials and local business leaders are looking to convince even more investors and industries such as biotech and data and technology to look past the deficit spending that pushed the island into bankruptcy and buy into an economy that slumped for more than a decade as it has been battered by hurricanes, earthquakes and political corruption.

“The Puerto Rico of today is not the Puerto Rico of even five years ago. The innovation and ecosystem that is brewing here is really quite something,” said Ella Woger, the acting chief executive officer of Invest Puerto Rico, a public-private partnership set up to promote business on the island. “We look forward to communicating this new narrative. We’ve moved beyond the fiscal crisis narrative and hurricane-stricken narrative that we had before.”

Having less debt to repay helps with that message. The commonwealth slashed $22 billion of bonds down to about $7 billion in March. The biggest mutual-fund holders of the restructured securities include Nuveen, T Rowe Price Group, Invesco, Mackay Shields and Vanguard, as of March 31, according to data compiled by Bloomberg.

“The debt has been downsized so substantially that relative to the size of the Puerto Rican economy, it looks manageable and serviceable without the kinds of stresses that forced the commonwealth into restructuring several years ago,” John Miller, Nuveen’s head of municipals, said in an email.

Related: Puerto Rico Is Out of Bankruptcy With $22 Billion Debt Exchange

Congress created the oversight board in 2016 to resolve the island’s financial crisis, which arose from years of borrowing to paper over deficits as its population fled and its economy contracted.

With Puerto Rico bonds rotating out of the hands of hedge funds and other distressed-debt buyers, the commonwealth has a larger investor base to tap into, Omar Marrero, executive director of Puerto Rico’s Fiscal Agency and Financial Advisory Authority, said in a telephone interview. He said officials want to earn credit ratings for Puerto Rico’s sales-tax and general-obligation bonds in the next year or two.

Commonwealth general-obligation bonds maturing in 2046 traded Friday at an average yield of 4.8%, which is about 2 percentage points more than top-rated municipals, according to data compiled by Bloomberg.

Island officials have lined up municipal-bond traders from JPMorgan Chase & Co., Barclays Plc, Goldman Sachs Group Inc. and Morgan Stanley to weigh in Monday during a panel at the conference -- called PRNOW Summit -- on how traditional state and local debt buyers are once again investing in the island’s securities. More than 500 attendees have registered for the conference Monday and Tuesday.

“They’ve restructured to a more reasonable amount of debt,” said Daniel Solender, head of municipals at Lord Abbett & Co., which manages $31 billion of state and local debt. “The economy there seems to be doing very well and they’re getting tons of fiscal stimulus. So it seems like they’re trending in a much better direction.”

Puerto Rico still faces challenges. Its economy is projected to grow by 3.5% this fiscal year and next, but may contract again in fiscal 2024 and remain flat in fiscal 2025, according to the commonwealth’s latest multi-year fiscal plan. The island’s population is expected to continue declining through fiscal 2026.

“There are long-term risks and bondholders will have to weigh those risks,” said Megan Poplowski, director of municipal research at MFS Investment Management.

The oversight board has clashed repeatedly with island lawmakers over issues such as spending cuts and pension benefits. It has the authority to certify a budget unilaterally if island lawmakers fail to create a compliant spending plan.

The board terminates after Puerto Rico and its public agencies, such as utilities, approve balanced budgets for four consecutive years. They must also have adequate access to the credit markets at reasonable rates before the board can leave.

Many Puerto Ricans say they want the board to end sooner because the panel has control over the island’s revenue and spending and takes away from the commonwealth’s ability to govern itself.

Once the board is winds down, bondholders lose a key backstop that can take action to ensure debt payments if island lawmakers fail to allocate money for principal and interest. The board did just that in February after Puerto Rico’s Senate declined to take up legislation that would direct money to pay debt service this fiscal year.

“In the short term, the credit looks good because you have the board keeping an eye on the island’s finances and you have economic growth due to federal disaster aid and stimulus,” said John Ceffalio, senior municipal research analyst at CreditSights. “Over the long term, there’s a lot of credit question marks.”