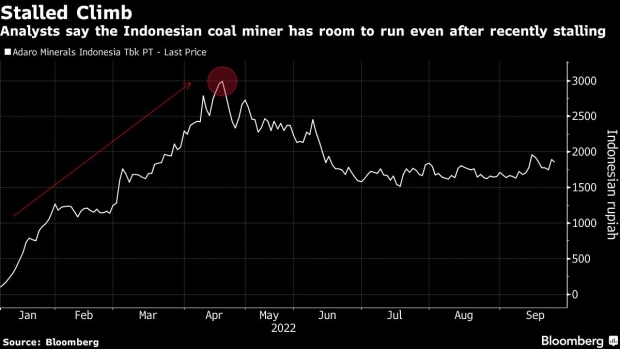 Coal on a barge loaded onto trucks at Cirebon Port in West Java, Indonesia, on Wednesday, May 11, 2022. Trade has been a bright spot for Indonesia, which has served as a key exporter of coal, palm oil and minerals amid a global shortage in commodities after Russia’s invasion of Ukraine. Photographer: Dimas Ardian/Bloomberg , Bloomberg

(Bloomberg) -- Asia’s hottest stock has been fizzling in recent months, but analysts think PT Adaro Minerals Indonesia may still climb higher thanks to a recent acquisition that will boost sales into the supply chain for electric vehicles.

Shares of the Indonesian coal miner have surged 1,650% so far this year, more than six times the performance of the second-best stock on the MSCI Asia Pacific Index. It is also the best performer among more than 3,600 metals and mining companies tracked by Bloomberg.

The stock has slid 40% since an April peak on concerns that the Federal Reserve’s aggressive rate hikes and a possible recession could hurt the metals industry. Still, the company’s expansion into aluminum production as a way to increase EV sales could mean more upside ahead. Analysts are predicting another 53% gain over the next 12 months, according to forecasts compiled by Bloomberg.

Adaro Minerals shares rose as much as 4% to 1,820 rupiah in early trade on Thursday, reversing a 4.1% drop in the previous day.

The market is “appreciating the EV story,” said Christopher Andre Benas, head of research at BCA Sekuritas, who added that there will also be increased demand for the firm’s existing coking coal business due to the rising needs from the nickel smelting industry, which relies heavily on the fuel.

The company reported a 491% jump in first-half net income in August due to higher average selling prices and 9% increase in sales volume to 1.17 million tons.

In February, Adaro acquired PT Adaro Indo Aluminium, an affiliated firm that’s building an aluminum smelter in North Kalimantan province. The firm aims to start production by the first quarter of 2025 to provide material for the EV industry. By then, proceeds should contribute to more than half of its revenue, which is currently coming exclusively from coal. Aluminum is a major input for the body of many electric vehicles, which are lighter than steel-made cars.

“The stock is still very cheap when taking into account the potential value of its aluminum business in the coming years,” said Ciptadana Sekuritas analyst Thomas Radityo. The brokerage has a 12-month price target of 2,650 rupiah for Adaro Minerals, an upside of over 50% from its last close.

Adaro’s price-to-book ratio of nearly 12 is hovering near lows reached over the summer, according to Bloomberg data, though it’s about six times higher than domestic peers including PT Bukit Asam and PT Indo Tambangraya Megah, which produce thermal coal. China’s Shanxi Coking Coal Energy Group and Australia’s Whitehaven Coal Ltd. -- both of which produce coking coal -- have ratios at about 2.

Still, there are some setbacks. Prices for everything from iron ore to copper has tumbled in recent months due to concerns about China’s economic growth, which is sapping demand. A stronger dollar is also pressuring broader markets.

“Challenges for Adaro Minerals are lower commodity prices for both coking coal and aluminum, lower demand because of slower global GDP expectation,” said Trimegah Sekuritas Indonesia analyst Hasbie. The brokerage has a buy-equivalent rating on the stock, citing that its valuation will become increasingly attractive once the aluminum business starts up.