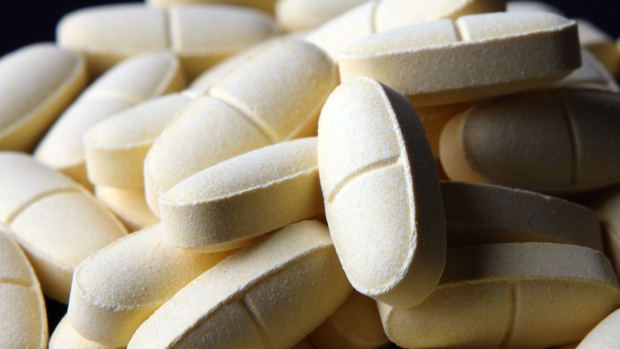 (Bloomberg) -- Purdue Pharma LP may have just set the starting point for determining what it will cost dozens of pharmaceutical companies to resolve legal liability over their role in creating the U.S. opioid epidemic.

Purdue, maker of the blockbuster painkiller OxyContin, filed for Chapter 11 protection Sunday to facilitate a more than $10 billion settlement that would help confront the public-health crisis spawned by opioid addiction and overdoses. If approved by a judge, the government would drop more than 2,000 lawsuits against the company and its owners, the billionaire Sackler family.

Twenty-four states and five territories now back the proposal. While a host of other state attorneys general oppose it, the deal may mark a new starting point in talks with other defendants, including drugmakers, distributors and pharmacies. Before the Purdue bankruptcy, some analysts expected the industry would have to pony up as much as $150 billion to resolve all the suits.

“This may be the new floor for settlement purposes,” said Richard Ausness, a University of Kentucky law professor who teaches about mass-tort cases. “These kinds of deals with a major actor like Purdue puts pressure on the other defendants to come up with settlement proposals.”

Negotiations with opioid makers, such as Johnson & Johnson and Teva Pharmaceutical Industries Ltd., and drug distributors like McKesson Corp. and Cardinal Health Inc., have been going on for more than a year on two separate tracks without much success.

A group of state attorneys general, led by Tennessee Attorney General Herbert Slatery, are talking with almost two dozen companies that make, handle or sell the painkillers about responsibility for an epidemic that kills more than 130 Americans a day.

At the same time, lawyers for cities and counties who’ve also sued opioid manufacturers and distributors are dickering with defendants over who should pick up the tab for billions in public funds spent on societal costs tied to addictions and overdoses. Governments contend their policing and treatment budgets have been ravaged by such costs.

Under the proposed Purdue deal, the drugmaker would be handed over to a trust controlled by the states, cities and counties. The company would also sell its U.K.-based drugmaking unit, Mundipharma, to raise additional cash to pay the plaintiffs.

Last week, U.S. District Judge Dan Polster in Cleveland, who is overseeing cases filed in federal courts across the U.S. by cities and counties, approved a negotiating class that will add heft to efforts by the municipalities to come up with a global settlement.

The first federal trial is slated to start next month, with two Ohio counties demanding $8 billion from opioid makers and distributors. And some of the defendants, including AmerisourceBergen Corp. and CVS Health Corp., moved to bounce Polster from overseeing all the cases, claiming he is likely biased against them, according to a court filing Saturday.

Purdue’s settlement scenario may get lawyers in both sets of negotiations talking about hard numbers, said Carl Tobias, a University of Richmond law professor in Virginia who teaches about product liability.

“For the deeper-pocket defendants, this will be seen as a starting point,” Tobias said. “While it’s going to be very difficult to apportion financial blame for the opioid mess, the governments will be seeking multibillions from some of these defendants and definitely more than $12 billion from others.”

At the same time, the Purdue deal could become a “ceiling” for some of the smaller opioid companies, who also face bankruptcy because of the threat of billions in damage awards, said Jean Eggen, a Widener University law professor who specializes in mass-tort law.

“Some of the smaller companies won’t be able to get near that figure individually,” Eggen said. “It’s very complicated trying to figure out how much some companies can and should pay in these cases.”

While the cities and counties’ legal teams are backing the current Purdue deal with gusto, about half the states are spurning it on the grounds it doesn’t provide enough funds to recoup tax dollars spent targeting the epidemic. They also say it lets the Sackler family off the hook with not enough of a financial penalty.

Some attorneys general, such as Massachusetts’s Maura Healey, have accused some of the Sacklers of personally pushing Purdue executives to illegally market OxyContin to reap billions in ill-gotten profits. “Eight people in a single family made the choices that caused much of the opioid epidemic,” Healey said in court filings.

Almost 400,000 people died from opioid overdoses in the U.S. from 1999 to 2017, according to the U.S. Centers for Disease Control and Prevention. While fatalities from prescription pills have leveled off, deaths from illegal heroin and synthetic opioids have skyrocketed.

“Some of the AGs want a bigger pound of flesh from the Sacklers,” Tobias added. “It’s become a moral and political issue for many of them.”

To contact the reporter on this story: Jef Feeley in Wilmington, Delaware at jfeeley@bloomberg.net