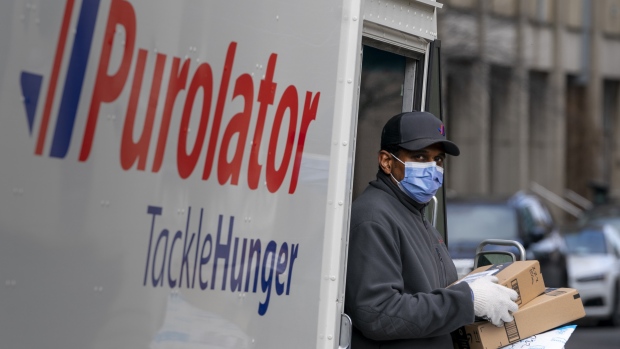 A Purolator driver wears a mask as he makes deliveries in Toronto on March 24, 2020. The risk of catching COVID-19 from packages delivered to doorsteps is believed to be low, but a health expert says taking a few extra steps when handling it can lower the risk even more. THE CANADIAN PRESS/Frank Gunn , The Canadian Press

TORONTO -- Purolator Inc. is bulking up on staff, vehicles and pickup locations as it braces for its busiest holiday season yet.

The shipping company, which is majority owned by Canada Post, said Thursday that it will add 2,400 people to its workforce, increase its vehicle fleet by 15 per cent and add dozens of new lockers and kiosks in anticipation of 54 million packages this holiday season.

The company says that is a record number of parcels that amounts to an almost 10 per cent increase from last year, when COVID-19 pushed more people to shop online and opt for delivery.

"There's an unprecedented volume for us and that's after we've been through quite a bit over the last few years through the pandemic."

Shipping companies have faced increasing pressures as COVID-19 spread throughout the globe and encouraged people to seek e-commerce rather than brick-and-mortar shopping experiences.

That caused a boom in online ordering that materialized amid a shortage of semiconductors -- chips used in electronics -- and an overwhelming amount of freight coming into docks.

With companies as large as Apple and General Motors impacted by these events, retailers have been urging people to shop early for holiday gifts and shipping companies recommend getting them in the mail even sooner than usual.

"We probably say that every year, but this year it really matters," said Ferguson.

He believes Purolator's busiest day -- typically Nov. 30 -- will see 1.8 million packages processed and the week leading up to Christmas will generate 7.1 million parcels. Both would be 20 per cent increases from last year.

From Dec. 1 to 24, Purolator expects to process 1.5 million packages a day and 26.3 million in total, a seven per cent increase from last year.

It is also predicting Black Friday and Cyber Monday sales will push its delivery volume to 1.6 million parcels between Nov. 29 and Dec. 5, a nine per cent jump from 2020.

Planning for the end of the year began as soon as last Christmas wrapped up, a departure from decades ago, when holiday season planning could happen in spring or summer, Ferguson said.

To rise to the challenges of a record year, Purolator will increase its staffing by 15 per cent. It currently employs about 13,000 people.

While the hospitality, trucking and oil and gas industries have struggled to attract workers recently, Ferguson said that hasn't been a problem for Purolator because it offers more stable pay, hours and benefits than some employers.

It will install delivery kiosks at more than 30 Metrolinx, Michaels and Purolator Shipping locations, up from 11 in 2020.

Parcel sorting capabilities will even be upped by 20 per cent at its busiest terminals as the company erects portable docks to handle the higher volumes.

Ferguson is confident that will be enough to handle the surges.

"Even though there's a lot of uncertainty coming into this peak season ... rest assured that Purolator is going to be able to handle it no problem this year."