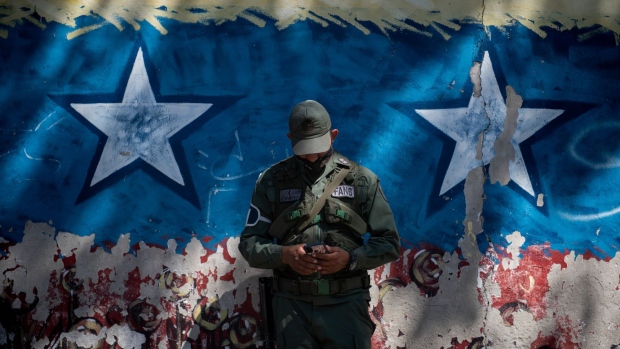 A National Guard member stands near the location of a signature referendum against the government in Caracas, Venezuela, on Wednesday, Jan. 26, 2022. Venezuela’s National Electoral Council, known as the CNE, collected signatures that could trigger a referendum to remove President Nicolas Maduro. , Bloomberg

(Bloomberg) -- A push to call a referendum aimed at ousting Venezuelan President Nicolas Maduro failed to reach a threshold to move forward, securing the socialist leader’s job until at least elections in 2024.

Fewer than 1.5% of voters signed on to a measure to start the process for a recall referendum, well short of the 20% needed in all 23 states plus the capital, the National Electoral Council said Thursday. Under the constitution, the opposition cannot request another referendum, the council said.

“If you wanted to get rid of the Bolivarian government this was your golden opportunity,” said Jorge Rodriguez, head of the government-controlled National Assembly. “You couldn’t even collect 1.5% of the signatures you needed.”

The referendum recall was requested by small opposition groups and snubbed by most of the largest political parties. Organizers said the government set up the process for failure. They were given just five days to campaign for the signature drive, which was hastily organized Wednesday. Only 42,421 people signed the measure, according to the council.

That leaves presidential elections as the only way to unseat Maduro through the ballot box. Conditions for that vote, scheduled for 2024, are expected to be negotiated when the government and opposition leaders restart political talks in Mexico. No date has been set for the talks to resume.

Maduro, who took over in 2013 after the death of Hugo Chavez, has won two elections, the most recent of which was beset by widespread claims of fraud. The economy has only recently emerged from a seven-year recession and a period of hyperinflation under his watch. Maduro’s approval ratings have fallen to less than 25% in recent polls.