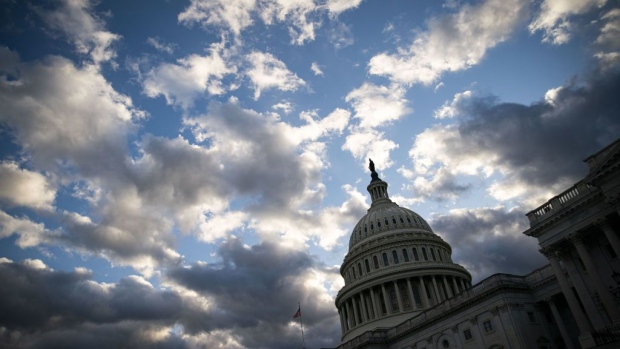 Remind us: How does a bill become law? , Photographer: Al Drago/Bloomberg

(Bloomberg Opinion) -- The presidential election seemed to mark a revival in American civic engagement. A record two-thirds of the electorate voted. Candidates raised at least $3 billion in small-dollar donations, and historic get-out-the-vote efforts had an impact in Nevada, Georgia and elsewhere.

Yet large numbers of Americans appear to believe President Donald Trump’s baseless charges of election fraud. Civic life and discourse have been eroded by the normalization of lying by elected leaders, the dissemination of disinformation via social media and the attempted weaponization of the courts to undermine confidence in voting.

Has there ever been a better time for a revival of civics education? Not your father’s bland civics, with its how-a-bill-becomes-law tedium, but a vigorous set of lessons about American society and government that encourages fact-based exchanges of views and civil debate about controversial topics without taking sides in contemporary disputes about such issues as abortion or immigration policy.

Civics should begin with a common narrative that Americans can agree on, beginning with what the Declaration of Independence and Constitution say about the role and structure of U.S. government. It should explore the definition of citizenship and how it has evolved over the course of 250 years via such documents as the Emancipation Proclamation, the Gettysburg Address, the Seneca Falls Declaration on women’s rights, and the Reverend Martin Luther King Jr.’s “I Have a Dream” speech. It should address the role of the electoral college, how it works, and how votes are counted. And it should examine the prerogatives of state and local governments and their relationship to the federal government.

A foundational civics course must include uncomfortable truths. That would mean delving into the three-fifths compromise of the constitutional convention, which made slaves count toward the congressional representation of slave states without granting them any political rights, along with the Indian Removal Act of 1830 and the Supreme Court’s sanction of Japanese internment during World War II and its 2018 decision to overturn that precedent. But divisive and complex debates about the degree to which slavery shaped American society should be left to more advanced classes.

Civics should also make room for local variations in content and execution. For example, the terms on which Southern states were readmitted to the union following the Civil War might receive more emphasis in the South, and the role of the 1787 Northwest Ordinances in expanding statehood could be stressed in the West.

The refreshing of civics curricula in Illinois and Florida provide a roadmap for how states should approach the topic today. Illinois’s civics mandate, especially a requirement that classes discuss “current and controversial issues,” is especially important. The law passed overwhelmingly in 2015 with bipartisan support — Illinois was among 11 states that previously had no civics mandate — and was signed by former Governor Bruce Rauner, a Republican. (While Illinois had long required high schools to teach two years of social studies, including one year of American history, the law now requires that at least one semester be devoted to civics.)

Facilitating constructive discussions of controversial topics requires special teacher training. Illinois offered all civics teachers professional development courses over a three-year period, and created a mentoring program for civics teachers, especially in schools with no previous civics course — as many as 13 percent of the total. The problem is that the state didn’t set aside money for the training, relying instead on philanthropies; a subject as important as civics should have a dedicated funding stream for educators and schools.

A well designed middle-school civics test could support fact-based debate and is arguably less onerous than a high-school graduation requirement; students who fail the class (in Florida the test accounts for just 30 percent of the middle-school civics grade) could retake the test and go on to high school. When the coronavirus pandemic recedes, states should consider eliminating all middle-school testing in lieu of a single meaty civics test that might include geography and some economics.

When it comes to civics, states have a lot of ground to make up. For decades, government policies, including state testing mandates and federal initiatives like President George W. Bush’s No Child Left Behind program and President Barack Obama’s support for Common Core, have focused on college and workplace readiness. Civics instruction got short shrift and was often abandoned.

As attacks on democratic institutions picked up steam during the Trump presidency, civics remained an afterthought. As of 2018, only eight states required students to take a yearlong civics and government class. The National Assessment of Educational Progress, which is considered the nation’s report card, dropped its 4th- and 12th-grade civics and American history exam in 2014. Few recent state civics efforts succeeded.

Now, as a few states begin to pursue a civics revival, one concern is political interference from the left and right. California Governor Gavin Newsom just vetoed an ethnic studies law that threatened to erode time and effort spent on other subjects, including civics. Last year, Florida’s legislature passed a bill requiring the state to review civics materials, a concern at a time when Republican lawmakers and Governor Ron DeSantis have promoted Trump’s baseless claims of election fraud.

States should borrow good ideas from each other, including Florida’s emphasis on middle-school civics and Illinois’s focus on constructive debate. A shared narrative will be stronger if buttressed by productive argument and brought to life by civic action.

Andrea Gabor, a former editor at Business Week and U.S. News & World Report, is the Bloomberg chair of business journalism at Baruch College of the City University of New York and the author of "After the Education Wars: How Smart Schools Upend the Business of Reform."