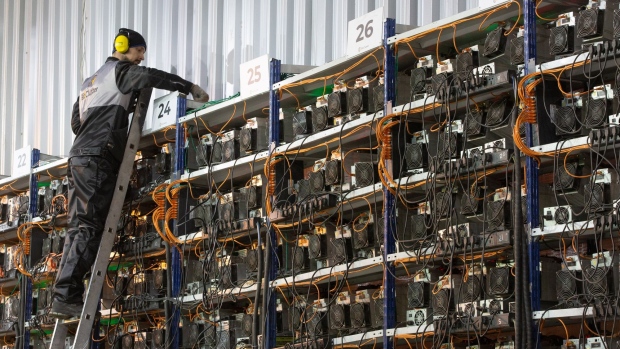 An engineer on a ladder inspects racks of application-specific integrated circuit (ASIC) mining devices and power units at the BitCluster cryptocurrency mining farm in Norilsk, Russia, on Sunday, Dec. 20, 2020. Norilsk may soon be famous for a different type of mining — it now hosts the Arctic's first crypto farm for producing new Bitcoins. , Bloomberg

President Vladimir Putin backs a Russian government proposal to tax and regulate mining of cryptocurrencies, rejecting the central bank’s proposal to ban it completely, according to three people familiar with the matter.

Putin supports the proposal to restrict mining to regions with a surplus of electricity, such as Irkutsk, Krasnoyarsk and Karelia, the people said, asking not to be identified because the information is not public.

Kremlin spokesman Dmitry Peskov declined to say what Putin’s stance was and said that the president ordered the government and central bank to work out their differences.

The press services for the government and central bank did not immediately respond to requests to comment on the status of the talks.

Putin’s position is good news for an industry that has suffered numerous setbacks recently, including China’s complete ban last year and Kazakhstan temporarily unplugging miners this week as the country faced blackouts. Russia became the world’s third biggest crypto miner in 2021, after the U.S. and Kazakhstan, according to Cambridge University data released in October.

The president’s backing, combined with his public comments this week, mean that the proposals are likely to be approved. Putin on Wednesday called for the government and central bank to reach an agreement soon over how to regulate crypto.

“We also have certain competitive advantages here, especially in the so-called mining,” Putin said during a government meeting, while acknowledging risks associated with crypto. “I mean the surplus of electricity and well-trained personnel available in the country.”

Mining Bitcoin, the world’s most valuable cryptocurrency, requires special computers that work to solve complex encrypted problems, and the biggest operating expense for the business is electricity.

Russia has a number of regions that have a surplus of electricity due abundant supplies from hydroelectric plants or because energy-intensive Soviet-era industrial facilities shut down.

Vitaliy Borschenko, co-founder of Russian miner BitCluster, said that miners were invited to join a working government group after the central bank published its report proposing a blanket ban on crypto.

“Most ministries and agencies are against radical measures,” Borschenko said.