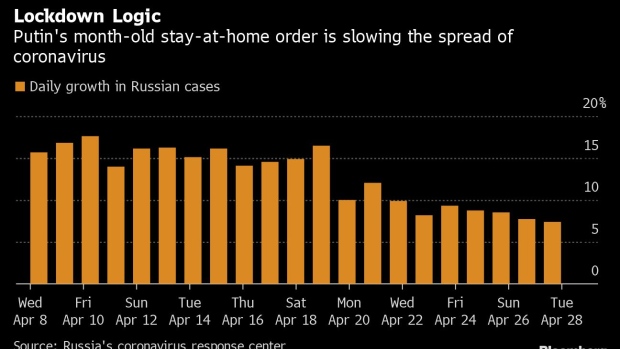 A customers wears a protective face mask inside a cafe as a television screen displays Vladimir Putin, Russia's president, delivering a national address, in Moscow, Russia, on Wednesday, March 25, 2020. President Putin postponed a planned public vote on constitutional changes next month that would allow him to rule to 2036 as the country attempts to stem the spread of the coronavirus. Photographer: Andrey Rudakov/Bloomberg , Bloomberg

(Bloomberg) -- President Vladimir Putin ordered Russians to remain under lockdown through May 11 after the total number of coronavirus cases in the country surpassed China’s.

“We have been able to slow down the epidemic,” Putin said Tuesday in a videoconference with officials and regional governors. “The peak has not yet been reached. We are facing the most intense stage of the fight against the epidemic.”

Putin also ordered the government to prepare a plan for gradually lifting the virus restrictions starting as early as May 12, and said ministers should draw up further programs to support the economy. Easing the measures against the epidemic won’t happen all at once, the president said.

Strict restrictions on going out in Moscow and other major cities have slowed daily growth nationwide to less than 10% over the last week. However, lockdown fatigue, improving weather and upcoming long holiday weekends may test people’s resolve as the stay-at-home order stretches into its second month.

The head of Russia’s public health watchdog, Anna Popova, called the holidays a “major risk” that could lead to a spike in infections in an interview with state television on Sunday. Russians traditionally flock to parks and public spaces for a series of holidays that celebrate May Day and its World War II victory on May 9.

In a sign people are planning to spend more time outdoors, orders for picnic supplies grew by half last weekend compared to the weekend of April 10-12, Tass reported, citing research by online marketplace Beru.

Russians have been increasingly flouting orders to stay at home, according to a self-isolation index based on location data gathered by internet company Yandex NV. On Monday, the gauge showed the most people outside since the restrictions were implemented in late March.

Increased surveillance may help reserve the trend. Moscow, which requires a digital pass for anything but walks near residents’ homes, ranks the most isolated among major Russian cities, according to the data. At least a quarter of Russia’s regions plan to institute a similar system, the Communications Ministry said last week.

The number of cases in Russia grew 7.4% in the last day to 93,558, according to the government’s coronavirus response center. The total number of infections surpassed China’s on Monday.