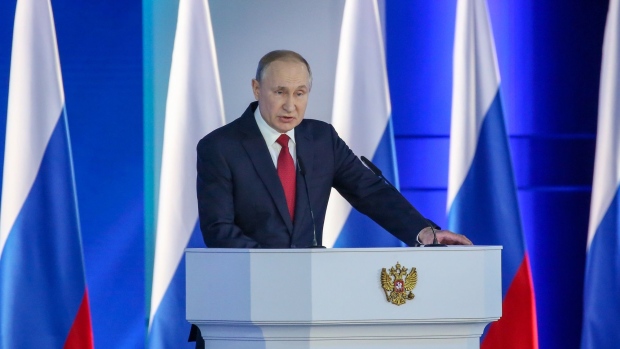 Vladimir Putin, Russia's president, speaks during his annual state of the nation address in Moscow, Russia, on Wednesday, Jan. 15, 2020. The Russian economy has nearly doubled since Putin took power in 2000, according to Bloomberg Economics estimates. Photographer: Andrey Rudakov/Bloomberg , Bloomberg

(Bloomberg) -- Russian President Vladimir Putin backed U.S. counterpart Joe Biden’s plan to run for re-election in 2024 even as he declined to commit to seeking a fifth term.

“The fact that President Biden announced his possible re-election, I believe that he was absolutely right,” Putin said Tuesday via video conference at the Russia Calling! investment forum. “If we begin to prepare for the elections now, the country’s governance will suffer.”

White House Press Secretary Jen Psaki said last week President Biden intends to run for re-election. Putin, 69, last year pushed through a series of constitutional amendments, including one that allows him to remain president until 2036.

“In accordance with the constitution, I have the right to be re-elected for a new term,” Putin said. “I have not yet decided for myself, but the very existence of this right already stabilizes the internal political situation.”

Before the amendments, Putin faced a limit that prohibited serving more than two consecutive terms as president. After his first two terms ended in 2008, he swapped places with his Prime Minister Dmitry Medvedev in a move that was referred to as castling. His current term also ends in 2024.