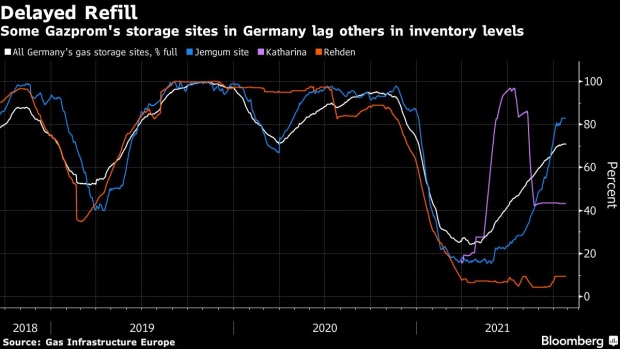 A worker inspects drilling pipes at a gas drilling rig on the Gazprom PJSC Chayandinskoye oil, gas and condensate field, a resource base for the Power of Siberia gas pipeline, in the Lensk district of the Sakha Republic, Russia, on Wednesday, Oct. 13, 2021. European natural gas futures declined after Russia signaled that it may offer additional volumes soon. Photographer: Andrey Rudakov/Bloomberg , Bloomberg

(Bloomberg) -- President Vladimir Putin told Gazprom PJSC to turn to refilling its European gas storage facilities from Nov. 8. The suggestion that long-awaited additional Russian supplies could be on the way pushed prices lower.

The move will “create a more favorable situation on the European energy market,” Putin said at a meeting broadcast on state television Wednesday.

He ordered the state-controlled giant to focus on filling the underground storage in Germany and Austria from Nov. 8, once it’s completed the process at home. Gazprom Chief Executive Officer Alexey Miller, speaking to the president via video link, said the domestic reinjection campaign would be extended a week longer than the original Nov. 1 end date.

Gazprom so far has pumped only very small amounts into its European storage facilities, he said.

Russia’s focus on rebuilding its domestic gas storage, combined with low levels of inventories in some Gazprom sites in the European Union has become a major concern for the continent’s market, which is struggling with a supply squeeze. European inventories on the whole are facing winter with the lowest seasonal level in nearly a decade. Prices have surged to record levels in recent weeks.

All gas-storage sites in Europe’s biggest market, Germany, where Gazprom has several facilities, are about 71% full now, according to data from Gas Infrastructure Europe. The situation with facilities owned and co-owned by the Russian exporter varies -- from 83% at Jemgum to 9.5% at Rehden.