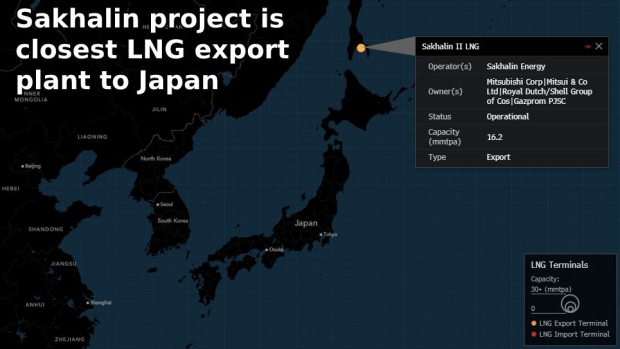 (Bloomberg) -- President Vladimir Putin signed a decree to transfer rights to the Sakhalin-2 natural gas project to a new Russian company, a move that could force foreign owners including Shell Plc to abandon their investment in the facility.

The decree cites threats to Russia’s national interests and economic security, according to a statement dated June 30, issued by the Kremlin and signed by Putin. Stakeholders have one month to say whether they’ll take stakes in the new company, and those who opt out may not be fully compensated, the statement said.

The move could prove complicated for energy giant Shell, which holds a 27.5% stake in the liquefied natural gas facility in Russia’s far east. The energy giant announced it would exit the project after Russia invaded Ukraine, and also said it wouldn’t commit to any new investments in the country.

Chief Executive Officer Ben van Beurden said earlier this week that they’re making progress selling their stake, which Wood Mackenzie estimates is worth $4.1 billion. China’s key state-run energy companies are in talks with Shell to buy its stake in the project, people familiar with the details said in April.

A Shell spokesperson wasn’t able to offer any immediate comment.

The world is already grappling with surging fuel prices as Putin steps up the use of gas as a weapon, and any effort by Moscow to take over energy assets could rile markets further. Most western energy firms are trying leave Russian projects, but are struggling to find willing buyers.

Other key Russian energy assets with foreign owners include the Sakhalin-1 oil project and the Yamal LNG project.

Japanese trading houses Mitsubishi Corp. and Mitsui & Co. own a combined 22.5% of the Sakhalin-2 project, and a majority of the gas produced there supplies Japan. While Japan was quick to impose a range of sanctions on Russia over its invasion of Ukraine, Prime Minister Fumio Kishida said in March the country won’t withdraw from Sakhalin-2.

An official at Japan’s Ministry of Economy, Trade and Industry said they are still trying to confirm media reports on the Sakhalin-2 project. Representatives for Mitsubishi and Mitsui said they were also still checking on the situation.

Jera Co., a joint venture between Tokyo Electric Power Co. Holdings Inc. and Chubu Electric Power Co., buys 2 million tons a year of LNG from the project under long-term deals, according to industry group GIIGNL. Hiroyuki Usami, a spokesman for Jera, said the company is aware of reports on the Sakhalin-2 project and is currently seeking to confirm it with an LNG seller.

Russia’s Gazprom PJSC, which holds the remaining 50% of the Sakhalin projects, will automatically get the same stake in the new company, according to the decree. Sakhalin Energy Investment Co., the venture which currently operates the export facility, is headquartered in Russia.

If the foreign firms want stakes in the new Russian venture, they must provide proof of their rights in the old company, with Moscow having the final say over whether they are allowed in, according to the decree. There will also be an audit to determine what damages were caused by the actions of foreign companies, and companies will be liable to pay the Russian government damages, the statement said.