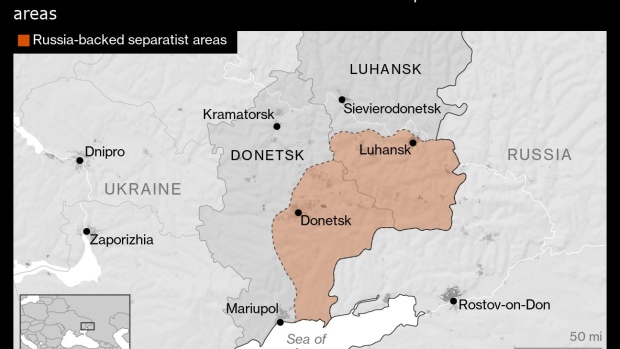 (Bloomberg) -- Vladimir Putin is an expert at bluffing and keeping the West on its toes, pushing relations to the edge before pivoting without warning. But, hemmed in and fuming, he is deadly serious about being heard on Ukraine.

Those close to the Kremlin say the Russian president doesn’t want to start another war in Ukraine. Still, he must show he’s ready to fight if necessary in order to stop what he sees as an existential security threat: the creeping expansion of the North Atlantic Treaty Organization in a country that for centuries had been part of Russia.

After years of disillusion with the West, Putin has gradually sidelined voices in his inner circle who had called for limiting tensions and is increasingly isolated from other views by Covid-19 restrictions, according to people close to the leadership. Surrounded by hardliners, he sees Russia — and his two-decade rule — as under attack by the U.S. and its allies.

Efforts at outreach and cooperation that he made when he first came to power have been replaced by showdowns, sanctions and threats. Putin now sees pushback as the only language the West understands. With both sides dispatching warships and planes to convey their seriousness and warning of a new arms race as treaties lapse, the hardened approach raises risks far beyond Russia’s neighborhood. Disputes with Europe over gas supplies have shaken markets, while a refugee crisis the European Union says was orchestrated by Putin’s closest ally in Belarus is pressuring the bloc and fears of conflict in Ukraine have battered the ruble.

The Kremlin knows that any attempt to occupy large amounts of Ukrainian territory militarily would be doomed to failure, facing widespread public opposition on the ground and triggering potentially crippling sanctions from the West, people close to the leadership said.

Still, hardened by years of resistance to sanctions and other pressure, Putin is anything but chastened despite U.S. warnings and phone calls from the leaders of France and Germany.

“Our recent warnings have been noticed and had an effect. A certain tension has appeared there,” Putin told Russian diplomats Nov. 18. “We need this condition to remain as long as possible, so nobody gets it into their head to cause a conflict we don’t need on our western borders.”

Ukraine is personal for Putin. He has repeatedly argued that centuries of historical and cultural ties mean Russians and Ukrainians are “one people” — an assertion many in Ukraine reject — and devoted a 7,000-word article to the idea in July.

The 2014 annexation of Crimea is one of his proudest achievements, reclaiming lands he asserts were historically Russian and preventing NATO from expanding into Black Sea ports vital to his country’s security.

His latest push is a challenge to U.S. President Joe Biden’s administration, which is focused on containing China and avoiding getting pulled into faraway military conflicts. While Russia lacks China’s economic clout, Putin has shown he can make plenty of trouble.

The U.S. has rushed to sound the alarm about his Ukraine buildup with allies in Europe, marshaling intelligence suggesting an invasion could come as early as January to build support for a coordinated response to deter Putin.

By contrast, the Kremlin sees the West as distracted and divided, with Europe lacking a powerful leader to replace outgoing longtime German Chancellor Angela Merkel.

For Russia, the fragile 2015 truce that halted large-scale fighting between Ukraine and Moscow-backed separatists in the country’s east left unfinished business. Now, with NATO steadily increasing military support for Kyiv and boosting patrols by warships and planes along Russia’s borders, the Kremlin sees the threat growing.

Putin has stoked war fears in the past only to back down once he got the West’s attention, most notably in April when he also massed troops near Ukraine’s border then defused the crisis once Biden called and offered him a summit meeting.

But each time, Putin has come away without the assurances he seeks on keeping NATO away from Russia’s southern border. Nearly daily cease-fire violations on the contact line between Ukrainian forces and Russian-backed separatists and the tens of thousands of troops and tanks just across the border mean the risk of war isn’t just a bluff.

People close to the leadership say Putin is sincere when he says he doesn’t plan an invasion this time. Only by mobilizing forces and demonstrating he’s ready to use them, as he has twice before with ex-Soviet neighbors, can he get the West to realize how serious he is, they say. So far, the Kremlin feels the tough approach is working.

“For Russia to raise the stakes at this moment gives it a chance to project its power,” said Oksana Antonenko, director at Control Risks in London.

At the same time, the Kremlin has hinted at a possible off-ramp, suggesting a call or even a meeting between Putin and Biden is in the works.

But a miscalculation on the ground in Ukraine’s east could trigger fighting that spirals out of control. Russia has issued over half a million passports to residents of the separatist regions, a move seen by Kyiv as a ruse to legitimize military intervention.

“This is not a frozen conflict,” said Alexander Borodai, a former separatist leader who’s now a member of Russia’s parliament. “Russia can’t avoid defending its population.”

Fueling Kremlin confidence is the conviction that Russia’s economy bounced back from the Covid-19 recession faster than many others. The central bank is sitting on over $600 billion in reserves, a record and enough to weather all but the most extreme sanctions the West could impose.

The Kremlin also sees little risk of any domestic challenge to Putin amid an unprecedented crackdown on opponents that’s put most in jail or exile. Officials are laying preparations for his fifth presidential term in 2024.

Still, while Putin’s aggressive geopolitics plays well at home, polls show any conflict with the West over Ukraine probably wouldn’t deliver the giant boost in public support that it did in 2014. Major sanctions that cut Russia off from the western financial system or hammered the ruble could trigger anger among Russians already unhappy about stagnant living standards.

For all the geopolitical shockwaves his interventions in places like Syria set off, Putin has been careful to limit the cost, leveraging an economy less than a tenth the size of the U.S. to challenge the world’s pre-eminent superpower when the opportunity appears.

Yet bold, even reckless, decisions have paid off for him, as the seizure of Crimea and a restoration of Russian influence in the Middle East after the Syria campaign demonstrate. The Kremlin learned from its brief 2008 war with Georgia  — another country intent on NATO membership — that Western anger at the seizure of territory may fade while Russian troops may remain.

“We’re now in confrontation with the West across the board,” said Dmitry Suslov, an expert on Russia’s relations with the U.S. and EU at the Higher School of Economics in Moscow. “Russia is delivering a message that it won’t tolerate things anymore.”

Russia sees no reason to take a softer line with Europe, according to people close to the leadership. While the West charges  authoritarian Belarusian President Alexander Lukashenko, bitter at Europe’s tightening sanctions on his regime, with instigating the migrant crisis, the Kremlin was happy to take advantage of it to pressure the EU.

As European gas prices surged to the highest levels in history, Russia, the continent’s largest supplier, shipped little beyond the amounts in its contracts, drawing criticism for using its vast energy reserves as a weapon.

According to people familiar with the situation, Russia has been slow to provide additional supplies until it gets something in return from Europe: approval for the Nord Stream 2 pipeline. A top Putin priority for years, the project was opposed by the U.S. and some European countries. Now built and partially filled with gas, the link awaits regulatory approval.

For the moment, the Kremlin says it’s ready to be “patient” about a project that may not deliver fuel until spring.

By contrast, since 2014, western leaders have found what little common ground there had been with Putin over Ukraine disappear, according to officials familiar with their conversations.

Moscow alleges the government in Kyiv is laying plans to move against the Russian-backed separatists in Ukraine’s east. Ukraine denies that.

Adding to Russia’s concerns are suspicions that western capitals support Kyiv in what Moscow sees as a desire to rewrite the 2015 Minsk truce accords that also offered a framework for resolving the conflict. Ukrainian President Volodymyr Zelenskiy, once seen as someone Russia might be able to deal with, has taken a harder line, fueling alarm in the Kremlin.

Russian anger spilled out last week when the Foreign Ministry broke diplomatic convention and published confidential letters between Russian and European ministers over the Ukraine crisis.

After long opposing the idea its neighbor could join NATO, Putin lately has toughened his stance, saying any expansion of the alliance’s military infrastructure into Ukraine would cross Russia’s “red line.”

The Kremlin dismisses NATO’s assurances that it’s not a threat. Putin’s spokesman Dmitry Peskov illustrated the depth of distrust by comparing the current situation to the early 1990s after the Cold War. Then, he said, NATO had “deceived” Russia by pledging not to expand the alliance to the east.

While the West and Russia may use the risk of a conflict to pursue their policy goals in Ukraine, “neither side is interested in a real war,” Ivan Timofeev, program director of the Kremlin-backed Valdai Club, said. “However, history knows many examples when rational calculations have failed to put an end to escalation.”