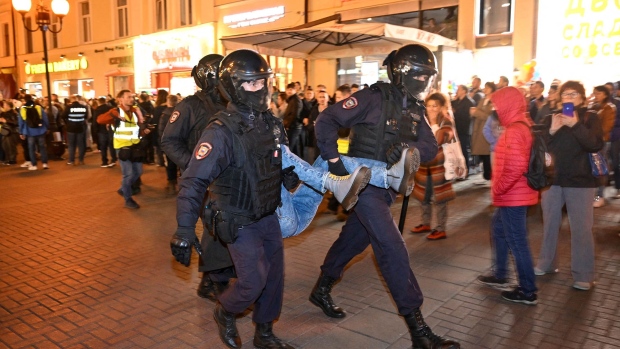 (Bloomberg) -- President Vladimir Putin’s order to call up as many as 300,000 reservists to fight in Ukraine triggered alarm and demonstrations as Russians were forced to confront the reality of the deadly conflict.

Police detained about 1,400 people at protests against the order in 38 cities Wednesday night, according to the OVD-Info monitoring group. Some of the male detainees were handed draft notices at police stations, and protesters may face criminal charges under the harsh laws against criticism of the war the Kremlin has imposed since the Feb. 24 invasion. Some university students who joined the demonstrations were threatened with expulsion, which could annul draft exemptions.

For millions of Russians who’ve been largely shielded from the reality of the Kremlin’s bloody seven-month war, Putin’s speech early Wednesday announcing a “partial mobilization” came as a shock. The authorities provided few details of how the order, which is the first in Russia since World War II, will be implemented and who will get drafted.

Regional governments quickly began issuing orders for reservists -- a huge category covering people who served as conscripts, contract soldiers, and part-time officers -- to prepare to be summoned and banning them from leaving the area, according to Pavel Chikov, a lawyer who advises on conscription cases. Doctors in Moscow also received mobilization notices, he said on Telegram.

Videos posted on social media showed draftees in the Yakutia region in Siberia being taken away by bus, seen off by crowds of tearful relatives.

Authorities in some cases came in the middle of the night to round up conscripts in order to fill the regional quotas that the military sets.

“They took my 40-year-old son at night,” said Antonina, a pensioner in the Far East who declined to give her last name. “Everyone who was taken in our village was over 40, not a single young one. They’ll grab anyone. There’s total panic and confusion.”

The mobilization order will affect 300,000 people and apply only to those with military experience, according to Defense Minister Sergei Shoigu. Students and people who haven’t served in the army won’t be called up, he said.

But the presidential decree doesn’t specify which categories of Russia’s 2 million reservists will be called up and has a secret clause.

Legal restrictions on leaving the country for those subject to mobilization “haven’t been implemented yet because it’s a partial one,” said Andrey Kartapolov, head of the Defense Committee in the lower house of parliament, according to RBC. “As for how things will go in the future, we’ll see, as they say.”

Finland’s border service reported a 50% surge in car traffic overnight and Georgian TV broadcast long lines on the Russian side of the border. Google data showed a spike in search requests for “how to leave Russia” and even “how to break an arm.” Social media were flooded with reports of soaring airline ticket prices.

A travel agent in Belgrade said tickets on Air Serbia, which offers the only flights from Russia to Europe, are sold out. “Until very recently, passengers looking to fly out of Moscow immediately had to wait for several days, maybe a week. Now there’s nothing, not even with stopovers” until mid-October, said Viza Air Travel agent Verica, who declined to give her last name.

For many the prospect of fighting in the war prompted drastic action. Kirill, the owner of an IT company, said he’s urgently relocating his 100 Moscow-based staff to Dubai to prevent them from being called up.

Many borders remained closed to Russians. The leaders of the Baltic states said their countries won’t offer asylum or humanitarian visas to men trying to flee mobilization.

“The war was OK for them when they saw it on TV, sitting on a sofa, but it is no longer OK when your government and your Shoigu calls you to join the army and offers to take part in the war with your own physical body,” Lithuanian Prime Minister Ingrida Simonyte said.

“One of the consequences of mobilization will be the fact that the apolitical and passive population will be trawling the Internet and social media to search for answers over mobilization,” Tatiana Stanovaya, founder of the R.Politik research group, said on Telegram. “And they’ll find them not where the Kremlin wants them to, and not just information about how they’ll be drafted.”

Putin’s “major problem is his confidence that the people support him by default because he’s a leader who’s doing the right thing in the national interests,” she added.

Worried relatives of those facing the call-up for war vented their anger on the Telegram channel of Vyacheslav Volodin, the lower house of parliament’s speaker and a Putin ally. In March, the Russian president promised in his annual message of congratulations on International Women’s Day that he wouldn’t call on reservists to serve in Ukraine.

A media outlet set up by jailed opposition leader Alexey Navalny fanned the discontent by broadcasting a conversation with the son of Putin’s spokesman Dmitry Peskov, in which the program’s host posed as an official from the military recruitment office. Nikolay Peskov, 32, said he wouldn’t obey the summons and would “sort this out at another level,” according to the audio recording. Peskov later said his son’s comments were taken out of context and that he would make the “only right decision.”

Public disquiet over the call-up may also boost inflationary expectations and lead consumers to pull deposits out of banks, said Locko Bank economist Dmitry Polevoy, highlighting what he called “the burden of mobilization costs.”