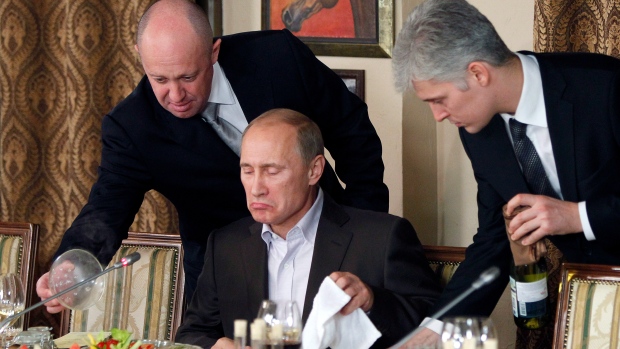 The secretive businessman known as Vladimir Putin’s “chef” for his Kremlin catering work is alleged to have helped Russia seize parts of Ukraine, turn the tide in the Syrian war and meddle in U.S. elections. Now he’s reaching deep into Africa with an army of mercenaries and spin doctors in tow to cash in on his newfound expertise.

Yevgeny Prigozhin, a restaurateur from Putin’s native St. Petersburg, has emerged as an unlikely point man in Russia’s belated push to bolster its geopolitical might by rekindling Cold War ties across a largely underdeveloped region laden with untapped mineral wealth. Lacking the financial muscle of its main rivals, the U.S., Europe and China, Russia is carving out a niche by shoring up strongmen in unstable but potentially rich states who have a taste for Russian weaponry.

Prigozhin and his hodgepodge of contract soldiers and political operatives are offering security, arms training and electioneering services in exchange for mining rights and other opportunities, two people familiar with the matter said. He’s already active in or moving into 10 countries that Russia’s military already has relationships with: the Democratic Republic of Congo, Sudan, Libya, Madagascar, Angola, Guinea, Guinea-Bissau, Mozambique, Zimbabwe and the Central African Republic.

This spurt of activity comes as Putin prepares to host more than 50 leaders for the first Russia-Africa summit in 2019. It’s an event that will cement “Russia’s active presence in the region,” Foreign Minister Sergei Lavrov said before a sweep through the continent earlier this year.

The low-profile nature of Prigozhin’s businesses ensures some deniability for the Kremlin. Putin, who gave Prigozhin an award for his service to the state in 2014, this year compared his old ally’s international work to that of George Soros, the American billionaire financier who’s long been accused by the Kremlin of subverting governments at Washington’s behest.

“The Russians want influence with governments, they want economic access and they’re much more flexible—that’s their advantage,” said Peter Pham, head of the Washington-based Atlantic Council’s Africa Center. “It doesn’t cost very much to send a couple of hundred guys to shore up a president.”

Prigozhin, 57, didn’t respond to email and phone requests for comment via his Concord Catering company, and officials in the countries he’s targeting had no comment on his activities.

Prigozhin and Concord were among the three Russian businesses and 13 people Special Counsel Robert Mueller indicted in February for allegedly interfering in the 2016 U.S. presidential election.  A U.S. judge on Nov. 15 rejected a bid to dismiss the charges by another of Prigozhin’s indicted companies.

Africa has been largely an afterthought for Putin, who came to power almost two decades ago focused on regaining Russia’s lost superpower status. After the Soviet Union’s 1991 collapse, Russia’s presence in Africa dwindled dramatically; now the region is a focus for Kremlin efforts to reassert its geopolitical prowess and open new markets for domestic companies hamstrung by Western sanctions. 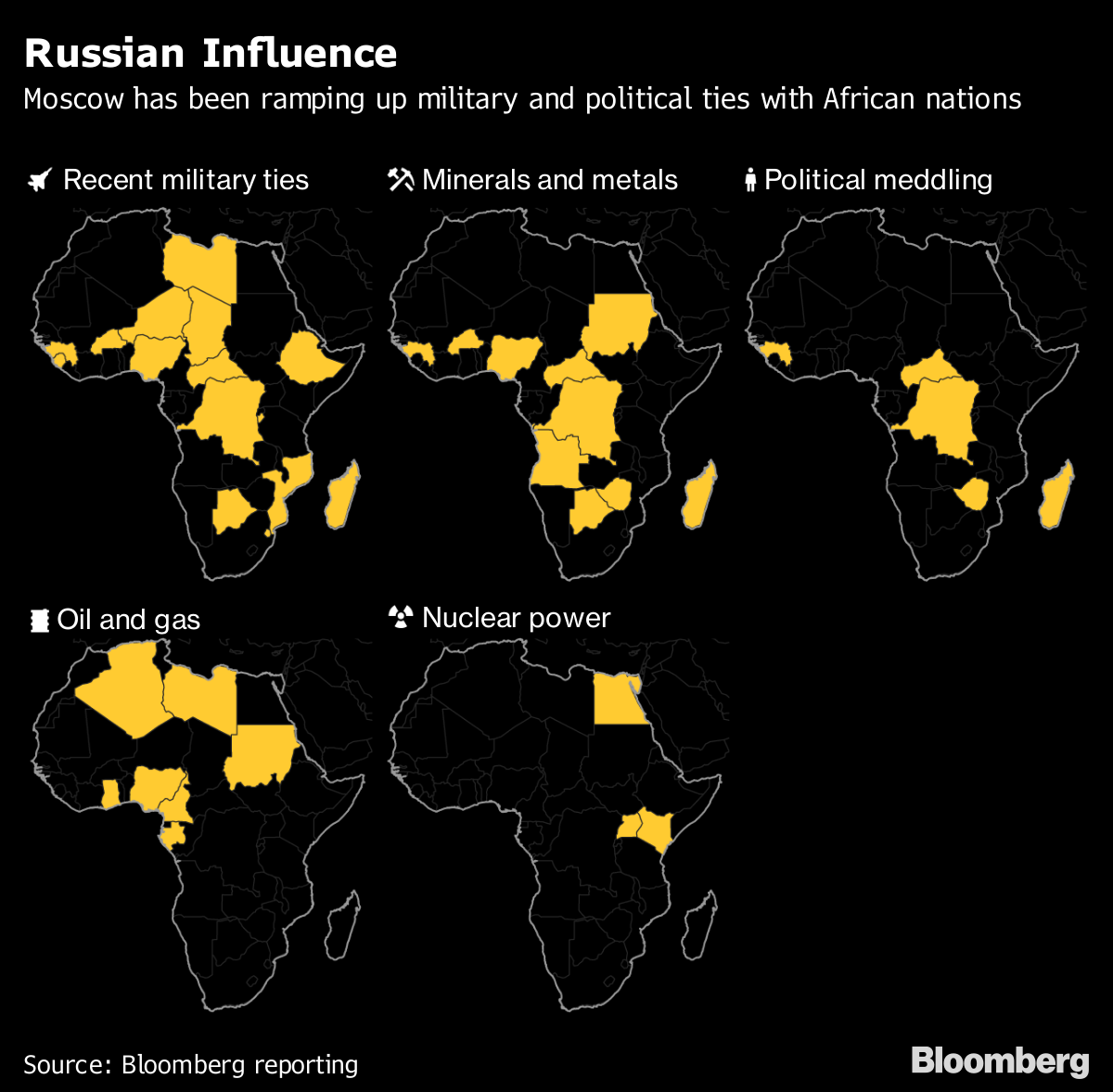 As relations with the West continue to plumb new lows, Putin is finally pursuing a comprehensive strategy for developing commercial and security ties with the continent as a whole, according to Polina Slyusarchuk, who runs Intexpertise, an Africa-focused research group in St. Petersburg. Russia has suffered setbacks, particularly in South Africa. President Cyril Ramaphosa froze his predecessor’s multibillion-dollar nuclear power project with Russia after he took office in February. But Putin is increasingly putting money behind the courtships, writing off some US$20 billion of debt held by African countries last year.

More recently, Egypt won a US$25 billion Russian loan to build its first nuclear power plant. And Russia is in talks with Eritrea to establish its first logistics hub on the Red Sea, not far from the Pentagon’s only permanent base in Africa and China’s first military facility abroad, both in Djibouti.

In March, Lavrov, Putin’s long-serving foreign minister, made a five-nation swing through Africa that included a stop in Zimbabwe, where Russian companies are involved in a US$3 billion platinum-mining venture, the country’s biggest investment project. Prigozhin wasn’t far behind.

Prigozhin’s political consultants advised Emmerson Mnangagwa on his disputed victory in the July election to succeed Robert Mugabe, who turned Zimbabwe into an international pariah during his four-decade rule, according to one of the people familiar with the matter. Mnangagwa’s main opponent accused “Russians” of helping his rival manipulate the polls. The ruling Zanu-PF party has denied any Russian involvement in the election.

Putin gained a military toehold in the heart of the continent early this year, after the UN issued a waiver for Russia to arm and defend the government of the Central African Republic. The CAR, which is mired in civil conflict, appealed for help after France, its former colonial master, suddenly ended a three-year peacekeeping mission.

“Like any normal businessman, Prigozhin is looking for the most lucrative places to invest his money”

The work of Prigozhin’s mercenary venture, known loosely in the Russian media as Wagner, has already led to gold and diamond concessions in both the CAR and Sudan, according to Russian and French media reports. Three Russian journalists were murdered in the CAR in July. They were investigating Prigozhin’s activities, according to exiled tycoon Mikhail Khodorkovsky, who was funding their trip.

Prigozhin is now expanding his reach across the border into the Democratic Republic of Congo, the largest country in Africa after Algeria and one of the world’s richest in minerals, the people said. The former Belgian colony is about to elect a new leader for the first time since 2001, when Joseph Kabila succeeded his slain father.

Kabila recently named a trusted retired general as his ambassador to Russia, tasking him with negotiating arms supplies and assistance, according to a Western official who asked not to be identified. The DRC said through its embassy in Moscow that Russia hasn’t yet supplied any weapons. It also denied local media reports that Russians are actively involved in the election.

If Kabila’s EU-sanctioned protégé wins as expected, then the DRC’s military ties with Russia will intensify, which in turn will lead to more opportunities for Russian companies, according to Jean-Jacques Wondo, a Congolese security analyst based in Brussels. China has invested heavily in the DRC, but Beijing is reportedly growing increasingly frustrated with Kabila’s shifting demands.

“Kabila is desperate for outside help,” said Martin Fayulu, an opposition candidate in the Dec. 23 poll. “It’s not surprising Russia is moving into the Congo, given our vast mineral wealth.”

Madagascar, the world’s biggest producer of vanilla and a holder of major deposits of nickel, cobalt and uranium, is another chaotic country where Putin and Prigozhin share an interest. A Kremlin envoy flew to the island in March for talks with then-president Hery Rajaonarimampianina.

Russian election consultants affiliated with Prigozhin are in the country amid a tight race for the presidency between two other former leaders that will end next month, one of the people familiar with his activities said. Russia has backed several candidates, according to Jean-Claude de L’Estrac, a former Mauritius foreign minister and expert on Indian Ocean territories. The Madagascar Foreign Ministry declined to comment.

In Guinea, Russia is supporting a bid by President Alpha Conde to scrap term limits so he can seek to stay in power after his mandate ends in 2020, said the Western official with knowledge of Russia-Africa ties. The African state is the single largest supplier of bauxite for Russian aluminum giant United Co. Rusal. Guinea Foreign Minister Mamadi Toure and government spokesman Aboubacar Sylla didn’t answer calls seeking comment.

Prigozhin’s private army, Wagner, which was sanctioned by the U.S. for its role in the 2014 Ukraine rebellion, drew international attention again in February, this time in Syria. As Bloomberg reported at the time, hundreds of its mercenaries were killed or wounded by U.S. forces as they advanced on a base held by Kurdish fighters. Wagner was trying to seize a nearby oil refinery for officials in Damascus who’d reportedly promised a share of future revenue.

“Like any normal businessman, Prigozhin is looking for the most lucrative places to invest his money,” said Irina Abramova, head of Russia’s state-funded Institute for African Studies in Moscow. “He thought, why shouldn’t I give it a go? And he should only be thanked for that if Africans benefit.”