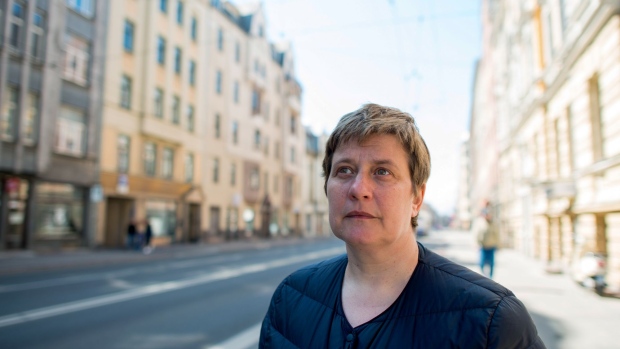 Reiter works from her laptop and phone in coffee shops around Riga. , Bloomberg

Meduza, a prominent independent Russian-language news site, knew it was in trouble after Russian President Vladimir Putin invaded Ukraine. But it didn’t expect the issues to come from Western sanctions.

Soon after the measures were announced, Russian readers began complaining payments via Stripe to the Latvian-based outlet weren’t going through, after the payments firm was forced to stop its service in the country.

“We couldn’t predict that the sanctions of Western governments will come first and destroy our crowdfunding,” forcing Meduza to start soliciting crypto and rely entirely on money from foreigners for the first time, Editor-in-Chief Ivan Kolpakov said.

After Putin essentially outlawed independent reporting on the war, keeping the lights on has become as important to Russia’s free press as figuring out how to report about their country from abroad after the new restrictions scattered hundreds of local journalists around the world.

The unprecedented pressure forced numerous independent media outlets to shut down, and other resources have been blocked by the government censor. Novaya Gazeta, whose editor Dmitry Muratov won the Nobel Peace Prize last year, suspended publication in March after regulators issued it warnings about its coverage, while Ekho Moskvy radio station had its FM frequency handed over to a state-run propaganda outlet.

Russia Paper Whose Editor Won Nobel Shuts Down Under Pressure

The Kremlin is also targeting social media, blocking Meta Platforms Inc’s Facebook and Instagram for “extremist” activities. Roskomnadzor, the internet censor, has issued fines and warnings to Alphabet Inc.’s Google over its YouTube policies. TikTok suspended live-streaming in Russia over the restrictions.

Amid the media crackdown, Putin’s popularity has soared, though it’s not clear how accurate public opinion polling is in Russia. In a March survey by the independent Levada Center, 83% approved of Putin’s actions as president, an increase of 12 percentage points on the previous month and the highest since 2017.

Meduza continues to publish investigations, including a recent chronicle of alleged atrocities committed during the Russian occupation of a town near Kyiv. The Kremlin denies its troops have committed war crimes.

The content is blocked in Russia, forcing users in Meduza’s main market to use virtual private networks to access it.

Their audience adapted quickly, as Meduza has pushed readers to download their news app and follow their Telegram channel. Kolpakov said they felt like a group of survivors in a bunker warning that the “apocalypse will come.”

Meduza lost about a third of its traffic after the restrictions. And they still have bills to pay. Now, instead of relying on donations from some 30,000 Russian readers who supported it before the war, Meduza is asking its international audience to send dollars, euros or crypto as soon as possible to help its 25 journalists resettle mostly in Riga.

Their donations page includes instructions on how to buy Bitcoin and Ethereum on Binance or, for contributors concerned about anonymity, a step-by-step guide to sending untraceable payments via Monero. The Bitcoin and Ether wallets listed on Meduza’s website held crypto worth around $230,000 at current prices, according to on-chain data.

Svetlana Reiter is one of Meduza’s reporters who moved to Riga after the invasion. In the two weeks after she arrived, she had three sources effectively block her on messaging apps. Reiter thinks it’s proof “that everyone is nervous now” to talk to exiled media. Even so, Meduza reporters still participate on Kremlin spokesman Dmitry Peskov’s daily conference call.

The disruption served as a wake-up call for her about how precarious journalism has always been in Russia, where nearly 60 reporters were killed over the last three decades.

“For a moment, I think we forgot we are living in this really strange reality,” Reiter said.

Those remaining in Russia face intimidation and worse. Shortly after Novaya Gazeta was shut, Muratov was attacked by two men on a train with red paint laced with acetone. In another incident, Ekho Moskvy’s long-time editor Alexei Venediktov posted images of a pig head left outside his apartment with an antisemitic sticker.

For Meduza, which was founded in Riga in 2014 during a previous media crackdown following Russia’s annexation of Crimea from Ukraine, the funding freeze wasn’t the first time it had to change its business model on the fly. When Russia designated the site a “foreign agent” last year, in a move that requires it to post a bulky disclaimer on every article and social media post, advertising revenue evaporated overnight.

Now Russia is considering an expansion of its law on foreign agents to allow the designation to be used even if individuals or groups don’t get funding from outside the country. Russia has designated scores of independent groups, journalists and activists under the existing legislation, first passed a decade ago.

Some news organizations funded by foreign governments were tagged as foreign agents.

With Russia increasingly off limits, Latvia, a Baltic country of about 2 million with a large Russian speaking population, has become a hub for exiled media.

Its capital Riga has become one of the main destinations, together with Tbilisi in Georgia and Istanbul, for Russian journalists seeking to escape Putin’s censorship after a law passed that carries a sentence of as much as 15 years in prison for spreading “fake” news about what the Kremlin calls a “special military operation.”

Outlets including Deutsche Welle and Radio Free Europe/Radio Liberty have relocated their Russian services there, while Novaya Gazeta’s new European offshoot will be published in Riga.

Jamie Fly, the chief executive of U.S. government-funded RFE/RL said the restrictions will make them rely more on freelancers and user-generated content, methods they’ve used in other countries including Iran, and could undermine attempts to reach their audience.

“You can’t just push out a URL and assume everyone’s gonna come to it and watch that livestream of a program,” Fly said.

For now, Meduza is raising about half of what it needs to develop, forcing it to live hand-to-mouth, according to Kolpakov, who declined to disclose how much in donations it brings in.

And the site’s reporters are still adapting to their new home outside Moscow. Alexey Kovalyov, Meduza’s investigative editor, can no longer meet with high-ranking government sources in person, and he’s no longer convinced his stories will change Russians’ minds.

He’s doing the work now for some day in the future when he hopes there will be a Russian war crimes trial. The shift in his mindset was only made more salient when Kovalyov’s friend, Russian reporter Oksana Baulina, was killed reporting from Kyiv.