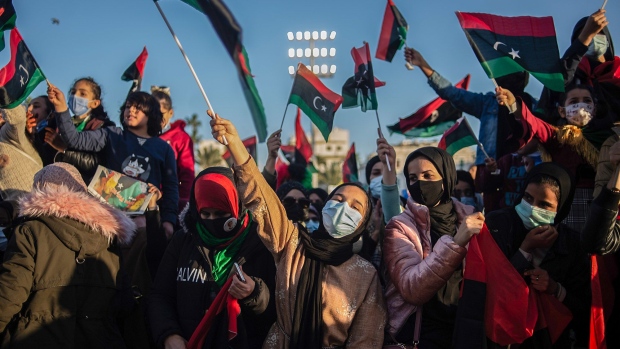 (Bloomberg) -- Libya’s presidential elections this year were meant to be a key marker in the oil-rich North African state’s return to stability after years of civil war. Instead, they risk unleashing more chaos as outside powers try to leverage their preferred candidates into place.

A decade after the NATO-led overthrow of Muammar Qaddafi, the installation of a government of national unity has brought a fragile cease-fire to Libya, with the Dec. 24 elections the next step in the stabilization process. Now, however, President Vladimir Putin is challenging the U.S. and Europe as well as rising regional power Turkey with a bid to elevate into power the ex-dictator’s son, Saif al-Islam Qaddafi, according to three people in Moscow with knowledge of the efforts.

With the risk of external meddling in breach of April’s United Nations-mandated cease-fire, the U.S. State Department warned of “grave threats to regional stability and global commerce” posed by “foreign actors exploiting the conflict.” It singled out Russia, expressing concern at its “destabilizing” influence, adding that the Libyan people must decide their own leaders.

Russia is pressuring military strongman Khalifa Haftar to support his one-time rival Saif al-Islam in what would be an unbeatable election combination, according to the people. Still, three others in Libya said that Haftar, a 77-year-old general who controls the east of the country, himself wants to contest the presidency. All asked not to named due to the sensitivity of Libya’s political landscape.

“We haven’t decided yet,” said Ahmed al-Mismari, a spokesman for Haftar’s self-styled Libyan National Army. “The situation depends on the constitutional base on which the elections are held and the election law, both of which have not been issued yet.” He batted away any suggestion that Haftar was being pressed to back Saif al-Islam, saying that he didn’t have information on the matter and no one has yet declared their candidacy.

The electoral contest runs a fine line between restoring stability and reigniting violence, and the stakes go beyond just political control. Libya has the largest crude reserves in Africa, and has struggled to produce at anywhere near the level it managed under Qaddafi during years of fighting that put the country’s oil fields, ports and workers in the firing line. Libya pumped 1.17 million barrels a day in July, down from 1.6 million barrels prior to the 2011 revolution and 3 million barrels a day in 1970.

Italy’s Eni SpA, TotalEnergies SE of France and Spain’s Repsol SA have stakes in the country, though withdrew overseas staff after an attempt to hold parliamentary elections in 2014 led to an escalation of conflict. Russian energy company Gazprom PJSC is also in Libya.

For Putin, who was horrified at Qaddafi’s brutal death captured on film, Libya is a deeply personal issue and he feels responsibility for Saif al-Islam, said a person close to the Kremlin. Russia’s president at the time, a Putin protege, abstained in a UN vote that paved the way for Qaddafi’s toppling after 42 years in power.

The Kremlin’s ploy, if successful, would boost Russia’s clout in the Middle East after Putin successfully intervened to prop up Syria’s Bashar Al-Assad. While he’s also bolstered authoritarian leaders in Venezuela and Belarus, bringing back Qaddafi rule would mark Putin’s boldest move yet.

“It would mean that Russia is capable of tearing to shreds what the West did,” said Sergei Markov, a political consultant to the Kremlin. A spokesperson for the Kremlin didn’t respond to a request for comment on Russia’s policy on the Libyan elections.

Russia is confident of Egypt’s support for its plan, according to two of the people in Moscow, although there were suggestions in Cairo that it’s too early for Egypt to decide its position. Moscow also has the tacit acceptance of Italy, which until now had kept closest to the rival Tripoli government, said one informed person in the Russian capital, who added that the U.A.E. and France opposed the plan. The Italian Foreign Ministry didn’t respond to a request for comment. Egyptian officials couldn’t be reached for comment, and the UAE and French foreign ministries didn’t respond when asked about Libya.

Other powers should be working with Moscow because “Russia is interested in stabilizing Libya,” said Irina Zvyagelskaya, a Middle East expert at the state-run Institute of World Economy and International Relations. “Qaddafi managed to keep the country together and avoid chaos and civil war, like Saddam Hussein in Iraq,” she said.

That cuts little ice with other external actors, not least because Saif al-Islam, 49, is wanted for war crimes by the International Criminal Court in The Hague. Once Qaddafi’s heir apparent, he’s only now coming out into the limelight after years of hiding out of public view.

Turkey, which has a major military presence in Libya that thwarted an assault by Haftar on Tripoli, regards the idea of a Qaddafi comeback as “not within the realm of possibilities,” a senior official in Ankara said. Officials in the U.S. and Europe agree. The election rules could in theory bar a Qaddafi from running, or make a problem of Haftar’s dual U.S.-Libyan nationality.  Mohammed al-Qailoushi, an aide to Saif al-Islam, didn’t respond to requests for comment.

A Russian political consultant, Maxim Shugalei, who was imprisoned for more than 18 months in Libya accused of plotting Saif al-Islam’s presidential bid, said in response to emailed questions that Russia’s goal is to ensure “a strong government.” Still, he dismissed as “unlikely today” the idea of an alliance between Haftar and Saif.

Libya’s interim prime minister, Abdul Hamid Dbeibah, topped a poll conducted by Shugalei’s research institute in February with 30%, followed by Qaddafi’s son at 26% and Haftar with 15%. Another leading contender, Fathi Bashagha, who promises a fairer deal for the oil-rich east in a bid to heal the divisions with the politically dominant west, had 17%.

Russia has leverage over Haftar, but forcing through a Saif al-Islam candidacy would be a “massive mistake” because his election would spark major fighting, said Tarek Megerisi, senior policy fellow with the North Africa and Middle East program at the European Council on Foreign Relations. “He would win with a small majority, and the revolutionary groups would start an immediate war,” he said.