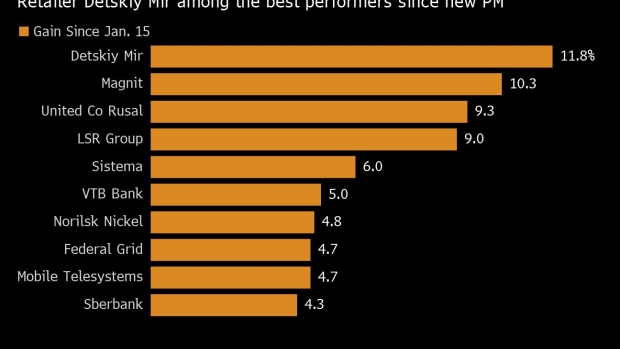 (Bloomberg) -- A clutch of Russian stocks is particularly well placed to reap the benefits of the possible $34 billion spending windfall under the nation’s new government.

Online bank TCS Group Holding, children’s toy and clothes retailer Detskiy Mir PJSC, and Magnitogorsk Iron & Steel Works PJSC were among the companies named by strategists as most likely to drive the rally in Russian equities. The arrival of a new government with a mandate to spend has fueled a 2% gain this year for local stocks, which trade at about half the projected price-to-earnings ratio of the main emerging-market benchmark.

Here’s a snapshot of the biggest gainers since the revamp:

Detskiy Mir, which sells toys and clothes in stores around Russia, is on a charge after about $65 billion was earmarked for families and the poor through 2024, including subsidies for mothers. Despite the stock being up 12% since the overhaul was announced last week, the company is still a “cheap, fast-growing” means of getting exposure to consumers in emerging markets, according to Julian Rimmer, a trader at Investec Bank Plc in London. The shares have the potential to climb until the company’s dividend yield of about 9% comes in line with the Russian market’s rate of 7.4%, he said.

Supermarket chain Magnit PJSC -- Russia’s second-largest retailer -- is up more than 10% in the past week on wagers that higher disposable incomes will swell profits. While BCS analysts expect the additional government spending to spur average salaries by 1.3%, they warn this may not be enough to give a significant boost to retailer earnings.

An increase in social spending could “improve loan repayment rates for retail banks,” such as TCS Group Holding, head of research at Sova Capital Mikhail Terentiev said by email. The share of TCS’s loans overdue by more than 90 days was 7.9% at the end of the third quarter, central bank data show.

The retail lending units of other banks could also benefit, he said. Shares in state-controlled Sberbank, which dominates the Russian market, have gained 4% since the start of the government changes.

Russia’s oldest steelmaker, Magnitogorsk Iron & Steel Works, spiked 5.4% on Friday, before paring the advance this week. The changes in the Russian government are also aimed at accelerating a $400 billion four-year infrastructure plan and “the market has started to look more positively” on the prospects for building projects and domestic demand for steel, according to Aton analyst Andrey Lobazov.

--With assistance from Anna Baraulina.

To contact the reporter on this story: Áine Quinn in Moscow at aquinn38@bloomberg.net

To contact the editors responsible for this story: Alex Nicholson at anicholson6@bloomberg.net, Natasha Doff