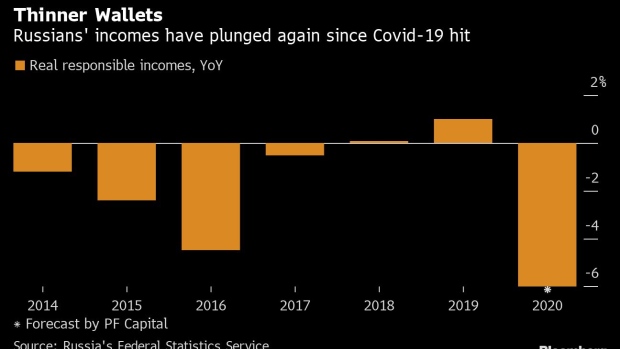 (Bloomberg) -- President Vladimir Putin said he’s not ready yet to take a Russian vaccine against Covid-19 because at the age of 68, he’s too old for those that are now available.

“Experts tell us that the vaccines now available are intended for citizens in a specific age category,” Putin told his annual press conference on Thursday. “The vaccines haven’t reached people like me. I’ll do it as soon as it becomes possible.”

Russia has the fourth-most cases of coronavirus globally at more than 2.7 million. It started a national campaign to vaccinate the public against the virus with the Sputnik V vaccine, but demand for the free shots has so far been limited.

Putin said vaccine production continues to be held back by lack of necessary equipment, but pledged that output would reach millions of doses per month next year. In response to a question, he said Russia’s distribution of the vaccine to other countries wouldn’t affect availability at home.

Sputnik V had officially been authorized for use only on people up to 60 years old. But several prominent officials above that age, including Defense Minister Sergei Shoigu, 65, and ultranationalist leader Vladimir Zhirinovsky, 74, have been shown on national television taking the shots.

Answering questions via video link from journalists around the country, Putin said Russia is coping better than advanced economies in Europe and the U.S. from the fallout of the pandemic.

Russia’s economy has contracted 3.6% so far this year, Putin said. “That’s less than all leading countries in Europe and the European Union, less than the U.S.,” he said. The Russian healthcare system proved more prepared and “more effective” than other major nations in dealing with the spread of the virus, Putin added.

The Russian leader acknowledged, however, that real incomes will fall 3% this year.

The world’s largest energy exporter warded off the crisis better than initially anticipated, mainly because many industries continued working through the pandemic and the size of its service sector is smaller than in western countries. After shrinking 4% this year, the economy may grow 2.6% next unless Covid-19 cases continue growing into the second half of 2021, which would curtail growth to 0.6%, according to the World Bank.