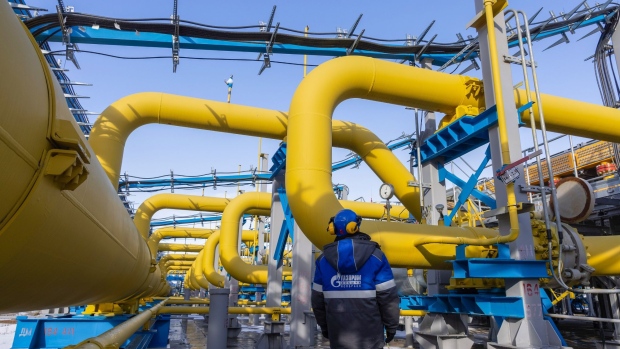 A worker checks the pressure gauge on pipework at the Comprehensive Gas Treatment Unit No.3 of the Gazprom PJSC Chayandinskoye oil, gas and condensate field, a resource base for the Power of Siberia gas pipeline, in the Lensk district of the Sakha Republic, Russia, on Monday, Oct. 11, 2021. Amid record daily swings of as much as 40% in European gas prices, Russian President Vladimir Putin made a calculated intervention to cool the market last week by saying Gazprom can boost supplies to help ease shortages. Photographer: Andrey Rudakov/Bloomberg , Bloomberg

Russia is ready to deliver the natural gas that Europe needs, but the continent’s current energy crisis is due to flawed policies rather than lack of supply, said President Vladimir Putin.

Europe’s largest gas supplier is “prepared to discuss any additional steps” and meet its partners halfway, Putin said at Russia Energy Week in Moscow on Wednesday. However, he also criticized the continent for introducing “systematic flaws” into its energy system then “blame shifting” when things went wrong.

A spike in gas and power prices is wreaking havoc in Europe’s economy. While state-run gas giant Gazprom PJSC has been fulfilling all of its long-term supply contracts, one reason for the continent’s energy crisis has been lower-than-expected supplies from Russia.

Putin said European customers made a mistake by relying on supplies from the short-term market to fill their depleted gas storage facilities, instead of securing long-term contracts.