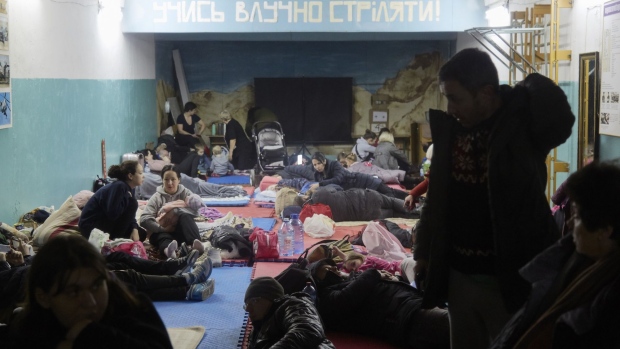 (Bloomberg) -- President Vladimir Putin shrugged off a barrage of sanctions imposed by the U.S and Europe and pressed deeper with the invasion of neighboring Ukraine, as Russian forces closed on the capital and its embattled leadership.

With the war in its second day, sirens warned Kyiv’s residents to take shelter from early morning. Ukraine’s armed forces said their units were engaging Russian armor to the north, while Ukrainian President Volodymyr Zelenskiy said that Russian aircraft were attacking residential areas of the capital.

In an early morning address on Friday, Zelenskiy said that his intelligence services had identified him as Russia’s top target, but that he is staying in Kyiv and his family will remain in the country. “They want to destroy Ukraine politically by destroying the head of state,” he said.

The offensive proceeded despite the U.S. and the European Union ratcheting up the pressure on the Kremlin with a coordinated set of sanctions aimed at inflicting a heavy toll on the Russian economy. The goal, said French Finance Minister Bruno Le Maire, is “to financially isolate Russia.”

Still, Russian markets rallied at the open after U.S. President Joe Biden and EU leaders shied away from the most drastic action, stopping short of barring Russia from the Swift international banking network and allowing exemptions for energy exports.

With Russia’s central bank pledging aid for sanctioned lenders, the MOEX stock index opened 21% higher in Moscow after Thursday’s 33% plunge. The ruble pulled back from its record low against the dollar of the previous day. Stocks in Europe also rebounded.

Russia brushed off the sanctions, vowing to retaliate, as it defended its invasion. Putin has said that he wants to replace Ukraine’s leadership, calling it a “junta.”

Senate speaker Valentina Matvienko, a Putin ally, said that Russia has prepared counter-sanctions to hit at “weak” spots of the West. Foreign Minister Sergei Lavrov met with envoys from the so-called Donetsk People’s Republic and Luhansk People’s Republic. He said the Russian assault was an unavoidable step to protect the breakaway zones that Putin recognized before ordering the attack.

Ukraine has repeatedly denied that it planned to try and retake the separatist regions.

In Kyiv, residents took to shelters as the government reported fighting raging. Russian forces continue to advance closer to the capital on the western bank of the Dnieper river, where they are being engaged by Ukrainian forces, presidential spokesman Oleksiy Arestovych said.

Gunfire was heard near the government quarter, AP reported. The Defense Ministry said that “thousands” of volunteers were signing up to fight the invasion, with 18,000 rifles handed out in Kyiv alone on Thursday.

French President Emmanuel Macron said that he’d had a frank, direct - and quick - conversation with Putin at Zelenskiy’s request. Macron said Zelenskiy, who hasn’t been able to reach the Russian leader, wanted him to ask Putin to stop the fighting and engage in diplomacy.

“It didn’t produce any effect so far as you can see, because the Russian president has chosen war,” Macron said. He is scheduled to join Biden and their NATO counterparts in a virtual summit on Friday.

Biden promised to inflict a “severe cost on the Russian economy” that will hamper its ability to do business in foreign currencies. The 27-nation EU backed a broad sanctions package to limit Russia’s access to Europe’s financial sector and restrict key technologies. The measures will be formally adopted in an emergency meeting of EU foreign ministers later on Friday.

Among the U.S. and EU penalties are export controls designed to cut Russia off from semiconductors and other advanced technology crucial to the military, biotechnology, and aerospace industries.

While U.S. allies including the U.K., Canada, Taiwan and Japan also announced fresh sanctions, China continued to weigh its response. Chinese state media left the invasion off their front pages on Friday even as the outbreak of war dominated social media.

Putin has received diplomatic support from China, which has criticized Western sanctions against Russia and said it understands Moscow’s “reasonable” security concerns. Still, the world’s second-largest economy has also called for the territorial integrity of nations to be respected, hinting at some degree of discomfort in Beijing with the offensive.

Biden made clear that the U.S. and Europe were unwilling to sacrifice their own economies to inflict punishment on Putin. He said restrictions on currency clearing would include exemptions for energy payments, a crucial source of revenue for Russia. Banning such sales would likely roil global energy markets and cause shortages in Europe.

Anti-war protesters took to the streets in cities from New York to Tokyo and across Russia itself. Angela Merkel, the former German chancellor, made a rare public intervention on Friday, condemning the attack and offering her support for international efforts to stop the war.

“This war of aggression by Russia marks a profound turning point in the history of Europe after the end of the Cold War,” she told German press agency DPA.