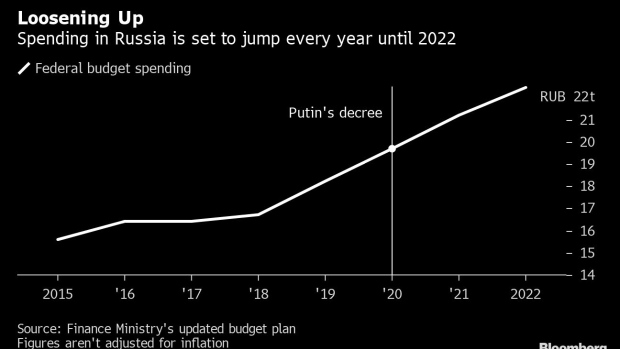 (Bloomberg) -- Russian President Vladimir Putin’s overhauled cabinet is set to open the way for a government spending spree after five years of austerity.

But the Kremlin isn’t throwing years of budget discipline to the wind. The increase in federal budget spending to 22.4 trillion rubles ($350 billion) by 2022 will be funded with a combination of higher state-company dividends and money from the government’s rainy-day fund, according to the Finance Ministry.

The fiscal loosening is aimed at boosting economic growth, which is stuck below 2%, and improving living standards as Putin prepares for a power transfer when his term runs out in 2024. Prime Minister Mikhail Mishustin said in his first meeting with the new cabinet last month that people need to “feel the difference” in their lives as soon as possible.

The budget amendments show a jump in spending every year through 2022. The bulk of the spending will come from a five-year infrastructure program dubbed the National Projects, that was meant to get underway last year but got held up. An extra 4 trillion rubles over four years was added following Putin’s promise last month to ramp up social handouts.

Some of the cash for the spending spree will come from the government’s rainy-day fund, where it saves extra oil revenue. To get around legal restrictions on using that money for regular spending, the government has worked out a deal for the fund to buy a big stake in the country’s largest lender from the central bank, which in turn will give most of the proceeds back to the government in a form it can spend without limits.

Other sources of revenue will include an increase in state companies’ dividends and more efficient tax collection, Finance Minister Anton Siluanov said Thursday.

Fiscal adjustments made after the oil price slump in 2014-2015 have left Russia with ample room to increase spending. The budget’s break-even is now $52 a barrel, one of the lowest among major oil-producing nations, according to research by JP Morgan Chase & Co.

Putin told the government earlier this month that Russia needs to take advantage of this opportunity as it “may not get another chance” to spend like this again.

This year most of the money Putin earmarked for social spending will go to support for poor households with children. The second-biggest beneficiary will be new mothers, as the government tries to tackle a looming demographic crisis. Schools and poor regions will also receive some money, the updated budget plan shows.

--With assistance from Áine Quinn.

To contact the reporter on this story: Anya Andrianova in Moscow at aandrianova@bloomberg.net

To contact the editors responsible for this story: Gregory L. White at gwhite64@bloomberg.net, Natasha Doff