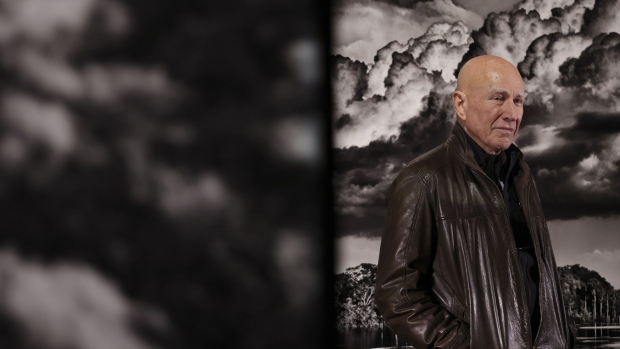 Sebastiao Salgado, documentary photographer, during the press preview of his Amazonia exhibition at the Science Museum in London, U.K., on Wednesday, Oct. 13, 2021. The exhibition which features over 200 images opens to the public on Wednesday. , Bloomberg

(Bloomberg) -- Sebastião Salgado is a Brazilian photographer who spent nine years in the Amazon rainforest, documenting the lives of traditional communities and the biome they inhabit. His exhibition Amazonia opened this week at the Science Museum in London. This interview has been condensed and edited for clarity.Bloomberg Green: Your exhibition talks about the risk of the Amazon reaching a climate tipping point — a certain point from which there’s no going back. How close are we to that?Sebastião Salgado:  I don't believe that the Amazon has reached this point of no return. I have no idea how close we are to the point where the Amazon will start to release more carbon than it’s emitting. But I do know that we have more than 82% of Amazonia still there. And we must fight hard for it to continue to be there. We cannot destroy more. Nature is capable of rebuilding very fast if we stop the destruction of the rainforest. We must all have a little bit more humility to consider the planet.

BG: When I came to this exhibition, I was expecting  photos of chainsaws tearing down trees. And I realized that maybe I have a bit of fatigue of those kinds of images. But there’s none of that in here. Why?Salgado: These pictures of the destruction you already know very well. You know that fires go on in the Amazon after August. September is the month to burn and we have a lot of pictures of this. We speak a lot about this. But no one speaks about the pristine Amazonia, the pure Amazon and the alive Amazonia. I believe that we must show this path so people can understand what is the Amazon, what are the dimensions, and what are the lives of the Indians who live there.BG: You spent nine years in the Amazon. How has it changed you and your view of your birth country? Is it difficult to return to your home in Paris when you’ve been there?Salgado: It changed me a lot. Just to see the size of the forest, the purity of the space, the quality of water at its best, the quality of the air, the capacity of the trees to regenerate and to capture carbon, to discover Indian communities who are no different from us.It’s a bit shocking to come home. It’s always a shame when you leave an area where there is no violence, where there is no private property. When an Indian dies, we get everything that he has, we put all together in the middle of the village, and set fire to it. There, you can use your time and do exactly what you want. When you come in from a complete freedom area like this, it's a little bit much to ask to us to come back inside our repressive system because we are under laws everywhere in this planet outside of the Indian territory. But when I come home, I go to my tribe. I go to my wife, I have a son with down syndrome.

BG : I want to ask you some questions about economics. Because you are an economist.Salgado: I’m a former economist. Not anymore.BG : Maybe,  but it’s an unusual combination to be an economist and an artist. We’re interested in this idea of carbon offsetting, that people in the Amazon can protect the forest in order to generate money, and that helps to other countries or companies to achieve their carbon targets. Do you think that this is a viable solution? Salgado: I don't believe that the economic model that applies in the Amazon is exactly the same economic model that we apply in Africa or in Asia. We destroy ecosystems to put in place our economic projects. But I don't believe that our economic projects are rational. They are completely stupid.My wife and I planted a forest in Brazil in the old farm of my parents. We're transforming it into a national park and we've got more than 3 million trees there. We know the price to plant the trees. What is the price to destroy the Amazon forest? It's the price that one day will be necessary to rebuild the forest. It costs a lot of money to rebuild a forest. This forest has a price: a huge price. Amazonian forest is probably the biggest concentration of capital in the planet.

BG: In the next couple of weeks, world leaders will meet in Glasgow for COP26. What do you think would be a success?Salgado:  If you don't plant the trees – and we must plant a lot of trees and the planet – it will be very complicated for us. And the big problem in these meetings is that it’s smart guys from towns speaking about ecological projects. But these guys don't know nature. The only people that know nature are the peasants and farmers. If we don't take a decision to plant billions and billions of trees around the planet, we cannot sequestrate the carbon that we emit, we cannot create the biodiversity that we need so much to be alive inside the Earth. If we don't integrate all these people in the debate, we will lose before we start.