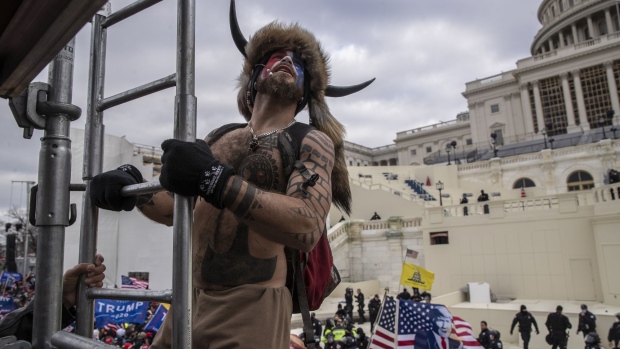 A protester climbs scaffolding as demonstrators swarm the U.S. Capitol building in Washington, D.C., U.S., on Wednesday, Jan. 6, 2021. The U.S. Capitol was placed under lockdown and Vice President Mike Pence left the floor of Congress as hundreds of Demonstrators swarmed past barricades surrounding the building where lawmakers were debating Joe Biden's victory in the Electoral College. , Bloomberg

(Bloomberg) -- The self-proclaimed “QAnon Shaman,” who became infamous for appearing in the US Senate chamber shirtless with a horned headdress during the Capitol riot, dropped the appeal of his guilty plea and 41-month sentence.

The request by Jacob Chansley to dismiss his appeal was granted, according to a Tuesday filing in the US Court of Appeals for the DC Circuit. Chansley, who was sentenced to three years in prison for his role on Jan. 6, 2021, appealed in November after he pleaded guilty a few months earlier to obstructing an official proceeding.

Chansley’s attorney, John Pierce, did not immediately return a call seeking comment on why his client voluntarily sought to drop his appeal.

Chansley became one of the most recognizable symbols of the insurrection after being filmed carrying an American flag through the Capitol. The Donald Trump supporter left a hand-written note on a dais that then Vice President Mike Pence had fled as the riot unfolded during the counting of electors for the 2020 presidential election.

“It’s Only a Matter of Time,” the note said. “Justice is coming!”