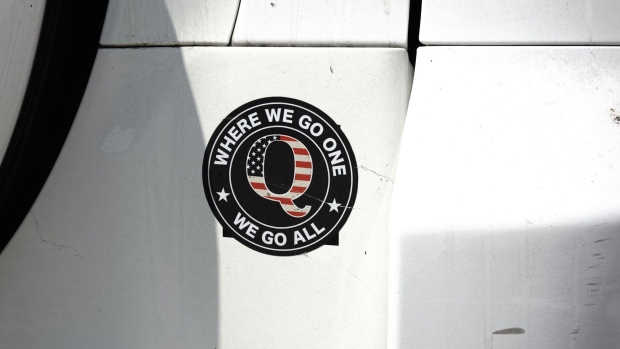 A QAnon bumper sticker is seen on a car outside a campaign rally for U.S. President Donald Trump at Yuma International Airport in Yuma, Arizona, U.S., on Tuesday, Aug. 18, 2020. , Bloomberg

(Bloomberg) -- A popular website for posts about the conspiracy group QAnon abruptly shut down after a fact-checking group identified the developer as a New Jersey man.

Qmap.pub is among the largest websites promoting the QAnon conspiracy, with over 10 million visitors in July, according to web analytics firm SimilarWeb Ltd., and served as the primary archive of QAnon’s posts. The website aggregates posts by Q, the anonymous figure behind the QAnon theory, and the creator of the Qmap.pub website is known online only as “QAppAnon.”

Reached outside his home, Gelinas declined to comment on the Logically report, saying only that someone had sent it to him on Twitter after it was published.

Wearing an American flag baseball cap, Gelinas said that QAnon is a “patriotic movement to save the country.”

A LinkedIn profile for Gelinas says he works as an information security analyst at Citigroup. Citigroup declined to comment.

The QAnon theory posits that President Donald Trump is battling a “deep state” ring of child-sex traffickers. It has already motivated some domestic extremists to violent acts or to threaten violence, according to the Federal Bureau of Investigation.

As some in Trump’s inner circle have shown signs of support for the conspiracy or its followers, questions have swirled about the identities of those responsible for promoting it. In August, Trump said that QAnon followers are “people who love our country.” The president’s director of social media, Dan Scavino, as well as the President’s son, Eric Trump, have posted QAnon imagery.

QAppAnon, the online name of qmap’s creator, also runs a Patreon account, which receives more than $3,000 a month in donations, according to the Patreon site. In March, QAppAnon announced on Patreon an upcoming Android app named “Armor of God,” a social network for followers of QAnon.

In Armor of God’s Google Play Store profile, the service describes itself as a platform “designed for patriots worldwide to create and share content including prayers, news, memes and posts.” The developer’s email address listed on the Google Play page is “support@patriotplatforms.com.”

According to its website, Patriot Platforms “is a technology company building next generation social media applications and tools.” The description is similar to the buisness purpose stated on the New Jersey business record linked to Gelinas’s home address: “create next generation news and social media platforms.”As of Friday, the Patriot Platforms website was also offline.