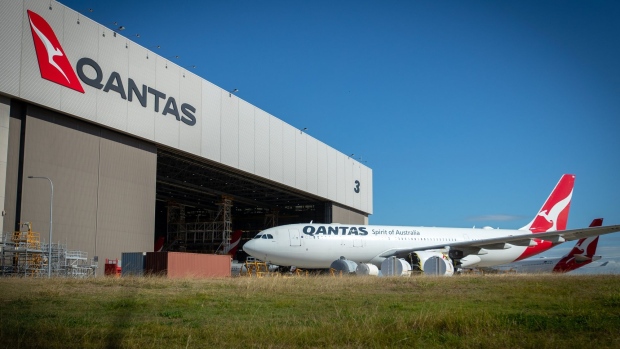 Grounded Qantas Airways Ltd. aircraft stand outside a hangar at Brisbane Airport in Brisbane, Australia, on Tuesday, June 9, 2020. Coronavirus-related travel restrictions have put enormous pressure on airlines globally, and none are certain about how the future will pan out as new travel requirements come into force and travelers' attitudes change. Photographer: Ian Waldie/Bloomberg , Bloomberg

(Bloomberg) -- Qantas Airways Ltd. pushed back the restart of international flights because of delays to Australia’s vaccination program and indications from the government that it will keep borders mostly closed until mid-2022.

The Sydney-based airline aims to open its overseas network from late December rather than the end of October, it said in a statement Wednesday. It will rely on a domestic travel boom and potential air-travel bubbles to underpin a recovery in the meantime.

Qantas increased services to New Zealand following the opening of a quarantine-free two-way travel bubble with Australia, but other international routes remain suspended as a wider resumption of travel is dogged by domestic vaccination delays. After suppressing Covid-19, the Australian government expected inoculations to be largely complete by October. That’s been pushed to 2022 because of complications tied to the AstraZeneca Plc shot.

“We remain optimistic that additional bubbles will open once Australia’s vaccine rollout is complete to countries who, by then, are in a similar position,” Qantas said. “But it’s difficult to predict which ones at this stage.”

The government said in its budget late Tuesday that inbound and outbound international travel is expected to remain low until mid-2022. Trade Minister Dan Tehan said last week the country’s borders may not completely open until late 2022.