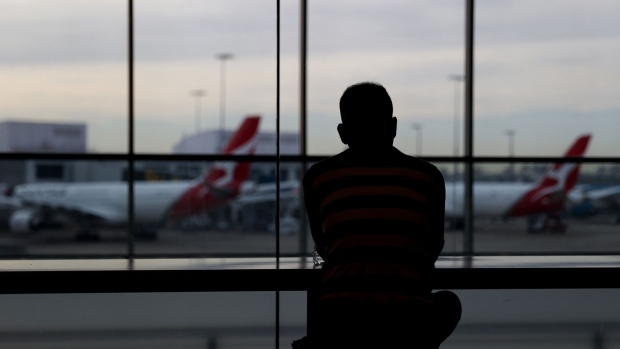 A traveler looks at aircraft operated by Qantas Airways Ltd. docked at gates at the international terminal of Sydney Airport in Sydney, Australia, on Monday, Nov. 1, 2021. Vaccinated overseas travelers entering Australia's biggest states, New South Wales and Victoria, no longer need to quarantine on arrival, while millions of Australians living on the country’s east coast can finally leave their home soil without a permit. , Bloomberg

A sustained increase in fuel prices means Qantas needs to “rebalance capacity and fares,” the airline said Thursday. Domestic services in July and August will fall to 103% of pre-Covid levels from 107%. Qantas had already cut flying in Australia next quarter to 110% of pre-pandemic volumes from a planned 115%.

Russia’s invasion of Ukraine has sent oil prices soaring, with crude above $100 a barrel for the majority of the time since early March. Sydney-based Qantas had warned it might have to raise fares if higher fuel costs persisted. The airline didn’t elaborate on airfare changes.

Cutting flights means Qantas can fill more of the seats on its remaining services, driving up revenue on those routes without buying much additional fuel. Every $4 jump in the oil price adds 1% to air fares, Qantas has said.

Qantas rose as much as 2.6% Thursday. The shares are up about 9% this year.