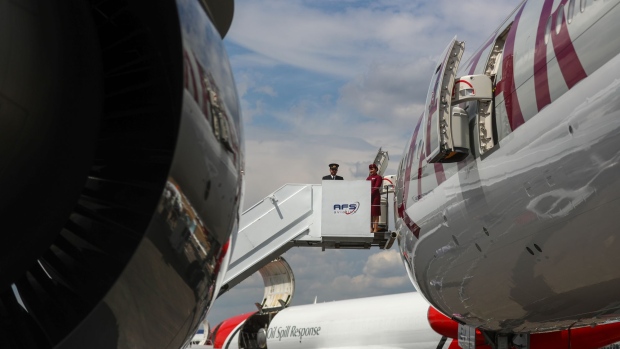 Aircrew stand at the top of steps at the entrance to a Airbus SE A350 passenger aircraft, operated by Qatar Airways, on the opening day of the Farnborough International Airshow (FIA) 2018 in Farnborough, U.K., on Monday, July 16, 2018. The air show, a biannual showcase for the aviation industry, runs until July 22. , Bloomberg

(Bloomberg) -- Qatar Airways says surface flaws on Airbus SE’s A350 jets causes a risk of the fuel tanks igniting, in the latest twist in an acrimonious legal dispute which will be fully aired in a London court next month.

In documents made public Tuesday, Qatar Airways said paint layers on large parts of affected A350s have been so badly damaged that wind and pollutants, such as salt or hydraulic fluids, can penetrate through the skin and damage the lightning protection of the aircraft. That raises particular concern on the wings, where fuel tanks are stored.

The accusation is the latest in a dispute which kicked off when Qatar Airways sued Airbus late last year over surface quality issues with A350 jets. Airbus acknowledges the problem but disputes Qatar Airway’s claim that it’s a safety concern.

Both sides have made compensation claims and Airbus has canceled two A350s for delivery and a separate contract for its bestselling A321s, both of which are now caught up in separate legal proceedings. The airline has grounded 22 A350s to date.

An Airbus spokesman said the company “rejects Qatar Airways’ ongoing and public mischaracterization of the nature of these issues and of their impact on the A350 aircraft’s continuous airworthiness.” Airbus has worked with EASA since the beginning and continues to do so, he said.

EASA didn’t respond to a request for comment made after regular business hours.

Qatar Airways’ Chief Technical Officer Ali Al Hilli said the current design and manufacture of the A350 “is defective” and that he has inspected all of the airline’s grounded A350s. The damage seen includes spider cracks, severe cracking on and around window frames, exposure of the lightning protection and of the underlying composite surface and damage to the lightning protection layer. The airline provided pictures in the statement purporting to show the damage.

In another witness statement, Qatar took on Airbus’s scrapping of the separate A321 order. The airline had sued over the cancellation and a judge is to rule on that dispute next week. Airbus had claimed the airline had grounded the A350s for commercial reasons because its business was hit by the coronavirus epidemic.

But Qatar Airways said in the documents released Tuesday that it’s “entirely incorrect” to suggest it’s operating under capacity, saying that capacity is now above pre-pandemic rates.

The airline said none of the other aircraft available to it -- including Boeing Co.’s 737 Max, 787 and 777 models -- are a true comparison to the A321neo. It hoped to use the economical, long-range aircraft to serve smaller markets such as Toulouse, Lyon, Bergen or Bilbao and has now put those plans on hold.

Qatar Airways also argued that Airbus is struggling to meet demand for the popular A321 aircraft after the manufacturer said in its own statements that even if the A321 contract were reinstated, it would be delayed by several months.

“If Airbus is unable to comply with its contractual obligations to deliver the A321 Neos in accordance with the delivery schedule, the responsibility for any delays lies with Airbus alone,” Krunoslav Krajacevic, a senior manager of production oversight and aircraft deliveries for Qatar, said in his witness statement. “I believe these delays may in fact be brought about by Airbus’s general inability to meet demand.”

Due to the grounding of the A350s, Qatar Airways said it has been forced to turn to alternatives, including wet leases -- a temporary arrangement where a lessor provides an aircraft along with crew, maintenance and insurance -- and bringing A380s back into service. These arrangements are costly and are leading to variation in the airline’s level of service which have caused complaints, the airline said.

Even with the legal battle continuing, the airline sought to refute Airbus’s claims that the relationship between the two companies has grown tense.

“Qatar Airways and Airbus have worked together for more than 20 years,” Krajacevic said. “I am confident that the relationship will remain strong and continue despite these proceedings.”