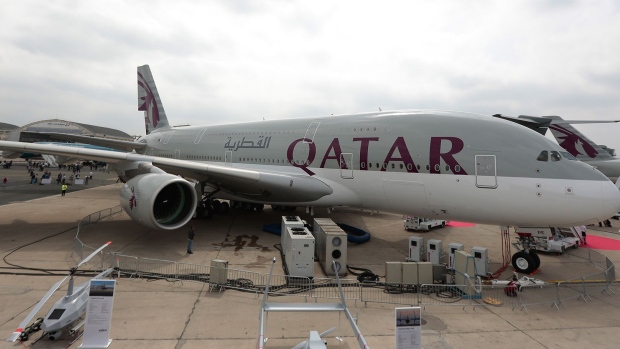 Qatar Airways is seeking US$618 million from planemaker Airbus SE in a dispute over surface and paint quality on A350 wide-body aircraft.

The airline is seeking the sum as compensation for the grounding of 21 A350s through Dec. 17, according to court documents made public on Thursday. Qatar Airways is asking for a further US$4.2 million for each day the aircraft continue to be idled.

The dispute flared up in the middle of last year and has worsened in recent months. In December, Airbus took the unusual step of issuing a statement denouncing its customer’s “ongoing mischaracterization” of the issue. Qatar took the matter to the U.K.’s High Court.

Airbus denies the Qatar Airways claims in total, according to a spokesman. The Toulouse, France-based planemaker, reiterated that the European Union Aviation Safety Agency has found no airworthiness issue with the aircraft.

A spokesman for Qatar Airways declined to comment on the court filing, which was reported earlier by Reuters.

Airbus has acknowledged that other customers such as Finnair Oyj have suffered surface degradation issues on the A350. The company maintains they stem from differing thermal properties of layers that make up the aircraft’s shell -- the structural carbon composite material, a sheet of copper lightning protection that wraps the fuselage and wings, and outer paint coatings.

Chief Executive Officer Guillaume Faury told Bloomberg on Thursday that the company is “mostly there” in terms of resolving the A350 surface issues. He said that the company was attempting to resolve the disagreement with Qatar over a proposed fix on a technical level, while also dealing with the legal dispute.

The court documents made public Thursday provide some insight into the timeline of a dispute that has seen the European manufacturer face off with one of its biggest customers.

In the filing, Qatar said that the problem first came to light in November 2020 when an A350 was removed from service to be repainted in Shannon, Ireland. During the removal of the surface paint it was discovered that the jet suffered from accelerated surface degradation.

Airbus sent engineers to Ireland to inspect the aircraft and then recommended that it be sent to its facility to Toulouse for further investigation. The repairs proposed by Airbus involve some 900 patches to different parts of the aircraft, vastly exceeding the normal handful, Qatar said.

The airline contends that Airbus hasn’t conducted a “proper full root-cause analysis” of the problem, meaning it isn’t possible to design and implement a permanent or durable repair of the airframe. The Airbus spokesman said the company has identified a root cause.

In the filing, the airline lists what it says are eight identified defects with the aircraft, including spider cracks around fasteners in the paint and expanded copper foil, abrasion and peeling, oxidation and so-called rivet rash, where paint is missing from fastener-heads.

The airline also says it entered into an agreement with Airbus in December 2020, through which the planemaker agreed to compensation of US$175,000 per day for any grounded aircraft, based on January 2015 prices.