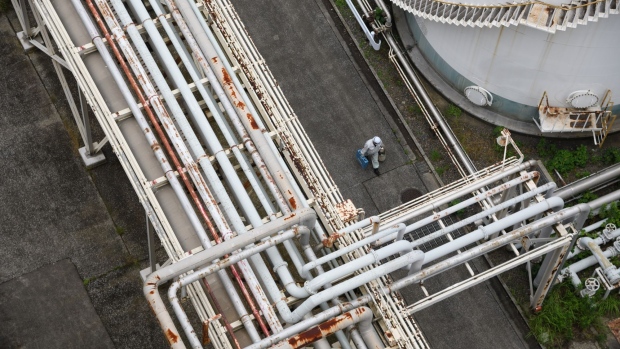 (Bloomberg) -- Qatar plans to insist on terms that will lock Europe Union countries in for two decades of liquefied natural gas purchases, a move that will complicate the bloc’s goal to cut emissions while also reducing its dependence on Russian fuel.

The Persian Gulf state, one of the world’s top LNG exporters, will demand that EU nations sign long-term contracts, according to people familiar with the situation who asked not to identified discussing a private matter. The EU countries say they need a shorter duration to hit the region’s pollution reduction goals, the people said.

A recent German deal for a 20-year US LNG supply agreement bolstered Qatar’s reserve to push through its demands, the people said. However, the Europeans argue that the Qatari offers are too rigid, providing buyers little ability to divert supply -- unlike the US contracts. Negotiations on the duration of the imports have been in deadlock since March, the people said.

State-controlled Qatar Energy and Qatargas, which operates the LNG facilities, didn’t immediately respond to requests for comment. Neither did Germany’s finance ministry.

European nations, led by Germany, have been pushing back against Qatari pressure over fears the strict nature of those contracts will mean they’ll need to keep importing the fossil fuel even after the region aims to curb emissions. If Qatar doesn’t relent, it threatens Europe’s ability to diversify gas supplies away from Russia as the middle eastern nation may move to sign more pacts in other regions like Asia.

Europe is racing to find alternatives to gas from Russia -- the continent’s biggest supplier -- after Moscow’s invasion of Ukraine. Imports of LNG from Qatar, which is investing tens of billions of dollars to boost production in the next five years, could be a key part of that solution.

Besides Qatar and the US, there are few other LNG exporters significantly boosting supply over the next decade, especially as the war in Ukraine is likely to crimp Russia’s expansion plans. But at the same time, European LNG demand is slated to balloon through 2030, while Qatar needs to lock-in customers to underpin an enormous expansion LNG plan.

The deal that Germany signed with the US earlier this week, while 20 years in length, has very flexible terms and allows for shipments to be diverted or even canceled for a smaller fee. Those terms could prove useful if future German gas demand falls amid the energy transition. Gas is a cleaner fossil fuel than coal or oil, but the industry is still responsible for significant emissions of carbon and methane.

In contrast, Qatar usually doesn’t allow for buyers to send shipments to different ports or scrap a delivery without paying the full value of the cargo.

The Qatari energy minister, Saad al-Kaabi, said on Tuesday that there were still “a lot of grumblings” in the negotiations between his country and Germany.

Robert Habeck, Germany’s economy minister, visited Qatar in March. He met the emir and al-Kaabi as part of Berlin’s push to shore up gas supplies as the nation prepares to start directly importing the super-chilled fuel.

Qatar said LNG could be sent to Germany from a new US plant it has a stake in, from 2024, but there’s been no concrete agreement.