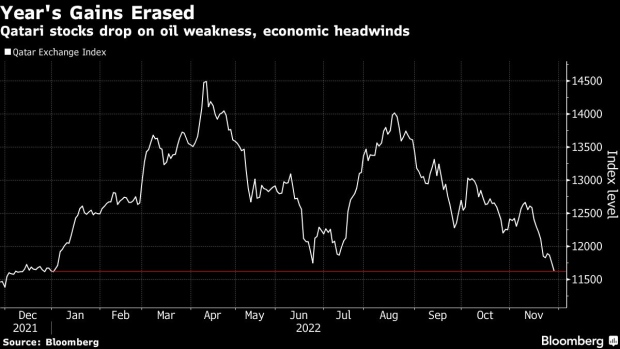 The Qatar Exchange Index extended losses for a third day as oil tumbled to its lowest level since December amid China unrest. The move wiped out yearly gains on the benchmark.

Qatari stocks fell as much as 2% today, taking the index back to end-December levels. It was trading down 0.9% on the year at 13:48 pm in Doha. It’s given up gains as investors assessed the drop in crude prices and the global economic slowdown.

A wave of unrest in China has clouded the outlook for energy demand, adding to the stresses in an already-volatile global crude market. The European Union has also floated a price cap on Russian crude. Qatar is both an oil producer and a major liquefied natural gas exporter.

The FIFA World Cup host halted most project rollouts in the second half 2022 to focus on the tournament and pay for overdraft facilities, said Chiro Ghosh, vice president of financial institutions at Sico. Investors expect a decline in economic activity following the event, especially related to hospitality, real estate and other services sectors, he said. Rising interest rates are also “making matters even more challenging and could lead to rise in delinquencies.”

The equity market is now pricing in 6% lower earnings growth for 2023, according to Ali El Adou, head of asset management at Daman Investments. The country, rich in oil and natural gas, is facing additional challenges relating to paying for the World Cup.

An uncertain outlook in the first half of 2023 “could keep a lid on equities” said Saugata Sarkar, head of research at QNB Financial Services, while adding that “we continue to like Qatar equities longer-term.” The index is heading potentially for its worst year since 2017.

A weakness in oil prices and higher bond-market rates are making dividend yields of several Qatari equities “less appealing on a relative basis,” he said, but the success of the World Cup along with anticipation of the dividend season should help markets into early next year.