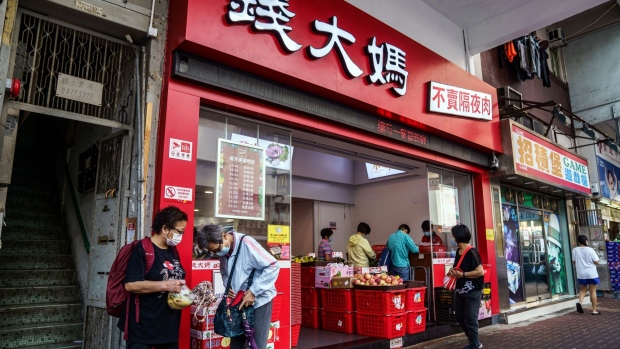 Pedestrians walk past a Qiandama store in Hong Kong, China, on Thursday, April 1, 2021. Chinese fresh food chain operator Qiandama is considering an initial public offering in Hong Kong as soon as this year, according to people familiar with the matter. , Bloomberg

The Guangzhou-based company is working with the banks on the IPO that could raise about $500 million, said the people, who asked not to be identified as the information is private. The share sale could take place as soon as the end of this year, they said.

Qiandama, which means Auntie Qian, is close to complete a pre-IPO funding round, according to one of the people. The company had planned to raise about 2 billion yuan ($310 million) in a new round that could value it at as much as 25 billion yuan, Bloomberg News reported in March.

Qiandama, established in 2012, sells products including vegetables, fruits, fresh meat and eggs through its franchised stores, according to its website. The company, which completed an almost 1 billion yuan fundraising in 2019, is well-known for its slogan “never sells overnight meat” and offers discounts toward the end of each day to clear stocks.

The fresh food chain operator opened its first overseas outlet in Hong Kong in 2018 and started expanding beyond southern China the following year. It runs more than 3,000 stores in over 20 Chinese cities as of February.