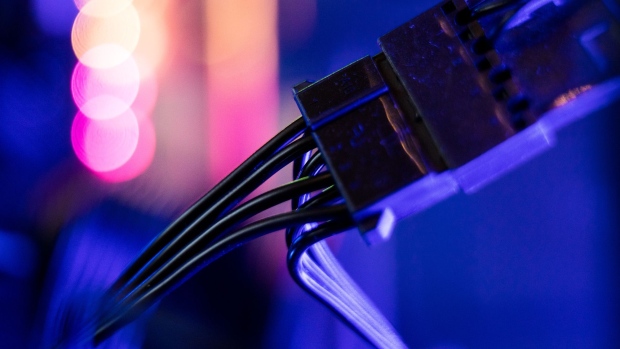 Lights illuminate a ATX power connector cables inside a 'mining rig' computer, used to mine the Electroneum cryptocurrency, in Budapest, Hungary, on Wednesday, Jan. 31, 2018. Cryptocurrencies are not living up to their comparisons with gold as a store of value, tumbling Monday as an equities sell-off in Asia extended the biggest rout in global stocks in two years. , Bloomberg

The widow of the founder of shuttered cryptocurrency exchange QuadrigaCX is returning about $12 million of assets from his estate to the company as part of a voluntary settlement.

Quadriga Fintech Solutions Corp. shut down in January following the death of founder and Chief Executive Officer Gerald Cotten, leaving some 115,000 customers out of pocket for about $260 million in cryptocurrencies and cash. His wife, Jennifer Robertson, has been dealing with the firm’s fallout ever since through a court-appointed creditor protection and bankruptcy process.

After Cotten’s death, Robertson said she “made every effort to assist in the recovery of the QuadrigaCX assets for the benefit of affected users,” she said Monday in an e-mailed statement provided by her lawyer. Since the proceedings began, Robertson said she’s been “responsive, helpful and cooperative” with the court-appointed monitor and trustee in the search for and recovery of cryptocurrency and other assets.

“I have now entered into a voluntary settlement agreement where the vast majority of my assets and all of the estate’s assets are being returned to QCX to benefit the affected users,” she said. “These assets originally came from QCX at the direction of Gerry.”

Assets excluded from the settlement include $90,000 cash, about $20,000 in her registered retirement savings plan, a 2015 Jeep Cherokee, her wedding band and other jewelry, $15,000 in personal furnishings and Quadriga shares, according to an Ontario court filing submitted Monday by the bankruptcy trustee. Assets surrendered were valued at approximately $12 million and would “materially improve the expected distributions to Quadriga shareholders,” the trustee said.

The trustee’s report identified several examples of property transferred from Quadriga to fund the purchases of personal assets for Cotten and his wife, including funds Robertson received and subsequently lent to Robertson Nova Property Management Inc. to buy real estate. Third-party payment processors were on various occasions instructed by Cotten to distribute “significant” amounts of fund directly to himself, Roberts or related companies. Most of the transfers and subsequent personal purchases with funds originating from Quadriga happened within the three years of the firm entered creditor protection.

Robertson reiterated that she didn’t know about Cotten’s dealings at the firm.

“I had no direct knowledge of how Gerry operated the business prior to his death, and was not aware of his improper actions in managing the QuadrigaCX business as outlined by the monitor in its 5th report in June,” she said. “Specifically, I was not aware of nor participated in Gerry’s trading activities, nor his appropriation of the affected user’s funds.”

As a result of the investigations, Robertson said she agreed to return assets she had previously thought were purchased with Cotten’s “legitimately earned profits, salary and dividends.”

“I was upset and disappointed with Gerry’s activities as uncovered by the investigation when I first learned of them, and continue to be,” she said.

Robertson called the settlement “a fair and equitable resolution” for Quadriga and its affected users, while allowing the trustee to continue efforts to recover as much as possible in an efficient way while keeping legal fees as low as possible.

“In return, this settlement will allow me to move on with the next chapter of my life.”