In a month during which the red-hot trade in technology stocks has wavered and options activity dominated headlines, traders just got jolted with a spike of trading volume and wild price swings.

Equity transactions surged Friday amid a quarterly event known as quadruple witching, when options and futures on indexes and equities expire. About 14 billion shares changed hands, roughly 40 per cent above the three-month average. The S&P 500 tumbled almost two per cent before paring the loss by half at the close.

The event got more attention than usual this time around because options activity from small investors and the so-called Nasdaq whale have been blamed for whipping up turbulence in internet and software shares. Despite an 11 per cent drop in the Nasdaq 100 from its Sept. 2 peak through Thursday, open interest on bullish contracts tied to the gauge remained elevated. So were calls linked to shares of tech titans like Apple Inc. and Facebook Inc.

“When you have those expirations, you typically get some more volatility,” said Jerry Braakman, chief investment officer of First American Trust in Santa Ana, California. “People need to figure out what to do with them, clear out those positions off their books and potentially re-up for other ones.”

While spikes in volume usually occur around the open and close, providing windows of robust liquidity, large price swings can happen suddenly at any time of the day as large derivatives positions roll over.

The expiration event usually coincides with a rebalancing of major indexes such as the S&P 500 and can spark some of the busiest trading days of the year. This time, index rebalancing alone could force US$32.4 billion of trades, S&P Dow Jones estimated.

About 90 million option contracts were set to expire Friday, according to data compiled by Chris Murphy, a derivatives strategist at Susquehanna. While the amount was up from a year ago, it trailed the June expiration by roughly 10 per cent.

One reason behind the shortfall is the robust use of short-dated options, especially calls sought by day traders to chase market winners, Murphy said. Because these options expire within days or weeks, few are left for quadruple witching.

Options contracts with maturities less than two weeks out comprised 75 per cent of all trades in July, a record high, according to data compiled by Goldman Sachs Group Inc. 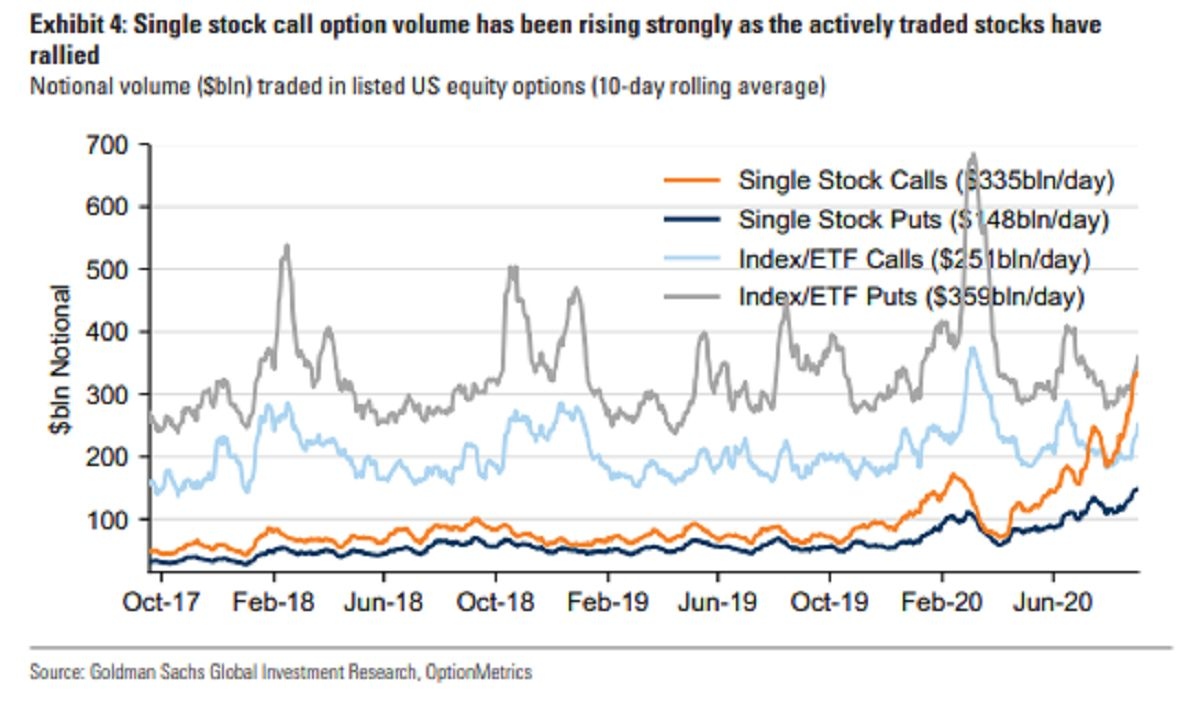 Another unusual feature this time around is the popularity of single-stock options, particularly bullish wagers, as investors chase stock winners, rather than hedging against broad market losses. At the start of September, single stock call option volumes averaged US$335 billion over 10 days, approaching the notional volume traded in index put options for the first time in at least three years, Goldman data shows.

That preference is likely to shift in coming months amid macro risks ranging from the U.S. presidential election to the path of economic reopening and trade tensions with China, according to David Silber, head of institutional equity derivatives at Citadel Securities.

“There will be an increase in index activity into year-end as people migrate out of single stock risks and focus more on the macro environment and the many events before then,” Silber said. “We can see another large expiration in Q4 closer to the size we saw in Q1, when there was a large demand for March options given the macro uncertainty around COVID.”