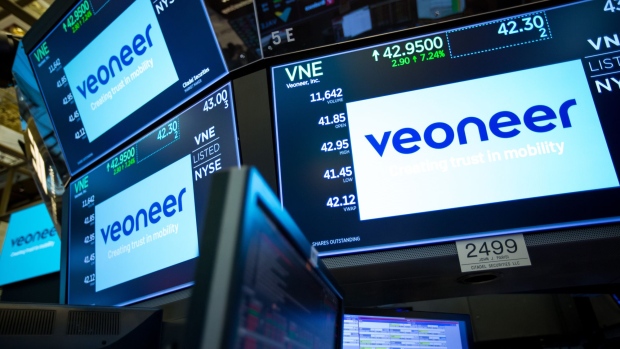 Qualcomm’s $37-a-share offer is an 18% premium to the bid of $31.25 a share from Magna, the fourth-largest auto supplier by sales. Qualcomm offered cash in a transaction that it said won’t require stockholder approval. The deal is expected to close next year.

At closing, SSW Partners, a New York-based investment partnership, will sell Veoneer’s Arriver business to Qualcomm and “lead the process of finding strong, long-term strategic partners” for Veoneer’s other units, the companies said in a statement Monday.

Veoneer is the biggest example of Qualcomm Chief Executive Officer Cristiano Amon’s aggressive pursuit of a role for the company outside the smartphone market that generates most of the company’s revenue. The Veoneer purchase follows his acquisition earlier this year of Nuvia Inc., which Qualcomm bought for $1.4 billion to produce chips that will bolster its efforts to get into the PC market.

Veoneer gives the chipmaker a firmer footing in the emerging market for driver-assistance technology. Qualcomm is already offering chips that run the information and entertainment features of vehicles and others that connected them to phone networks.

Qualcomm shares rose as much as 0.8% shortly after the start of regular trading Monday in New York, while Veoneer advanced as much as 3.8%. Magna’s stock climbed as much as 1.1%.

Veoneer said in a regulatory filing last month it had agreed to pay a $110 million breakup fee to Magna if it received a superior proposal.

Qualcomm is increasing its capabilities to better take on rivals in the race to provide the heart of technology that is expected to eventually enable self-driving vehicles. Automakers are turning to chipmakers to assemble the various pieces of hardware and software that will power such systems. Intel Corp. and Nvidia Corp. have automotive chip divisions that offer customers more than just the basic components.

Qualcomm’s Amon was promoted to the company’s top job in June and said his tenure will be defined by his success in lessening its reliance on the smartphone market its processors and modem dominate. Automotive products accounted for about 3% of chip sales last year and has been growing slowly in recent quarters.

Amon had said his company’s interest in Veoneer was driven by Arriver, Veoneer’s software unit that works on helping cars perceive and make driving decisions.

Prior to the deal, Qualcomm and Veoneer had said they planned to develop driver-assistance and autonomous systems that integrate Veoneer’s perception technology and software stack with Qualcomm chips. The companies said in January they had presented their systems to automakers and top-tier suppliers and got positive feedback, though they haven’t announced any customers.