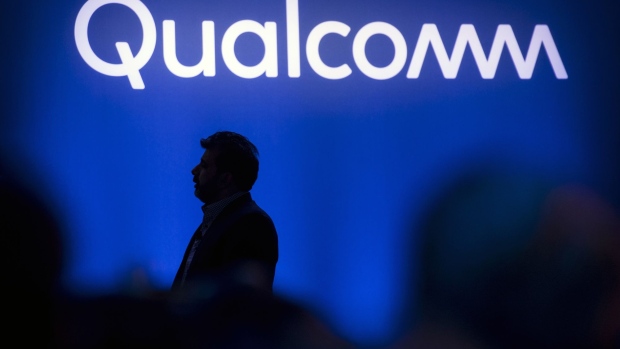 Nakul Duggal, senior vice president of automotive product management at Qualcomm Technologies Inc., is silhouetted while speaking during the company's news conference at the 2019 Consumer Electronics Show (CES) in Las Vegas, Nevada, U.S., on Monday, Jan. 7, 2019. The company’s chips will be in 30 devices with 5G connections coming to the market later in 2019, Qualcomm said Monday at the annual CES show in Las Vegas. , Bloomberg

Qualcomm Inc. gave a stronger-than-predicted forecast for the current quarter, indicating that smartphone demand may be picking up after a prolonged slump. The company’s shares rose in extended trading.

Fiscal first-quarter revenue will be US$4.4 billion to US$5.2 billion, the San Diego-based company said Wednesday in a statement. That mid-point of the estimate, US$4.8 billion, compares with an average of analysts’ estimates of US$4.78 billion, according to data compiled by Bloomberg.

Investors have been waiting to see whether Qualcomm, now in its fifth year of revenue declines, can parlay its claim of leadership in 5G wireless technology into sales growth. The new services are debuting this year with handsets from Samsung Electronics Co. that will take advantage of the faster downloads and response times offered by the upgraded networks. Most analysts expect wider availability next year.

Qualcomm, whose chips are the main component in most of the world’s smartphones, has suffered shrinking revenue as consumers hang onto their handsets longer. In China, Huawei Technologies Co., which supplies itself with the majority of its crucial components, has been gaining market share, hurting demand for Qualcomm chips used by Huawei’s rivals.

A renewed supply relationship with Apple Inc. for future versions of the iPhone and new fifth-generation, or 5G, high-speed networks and phones are causing optimism that the company’s financial performance will improve.

Qualcomm still needs to resolve its ongoing technology licensing dispute with Huawei and succeed in its appeal against a sweeping antitrust ruling from a case brought by the U.S. Federal Trade Commission.

Separately, the company said it appointed Akash Palkhiwala as chief financial officer. He has been serving as the interim CFO since August.

Qualcomm shares rose about 4 per cent in extended trading after closing at US$84.63 in New York. The stock has gained 49 per cent this year, about equal to the rise in the Philadelphia Stock Exchange Semiconductor Index.

Net income rose to US$506 million, or 42 cents a share, in the period ended Sept. 29, from a loss of US$513 million, or 36 cents, a year earlier. Excluding certain items, profit was 78 cents a share, compared with an average estimate of 71 cents. Revenue declined 17 per cent to US$4.81 billion. Analysts on average had predicted US$4.71 billion in sales.

Qualcomm is unique in the chip industry because the company gets the bulk of its profit from licensing patents that it says cover the fundamentals of all modern phone systems. The majority of Qualcomm’s revenue comes from selling chips that run phones and connect them to cellular networks.

While Qualcomm settled its broad-ranging legal dispute with Apple and the iPhone maker agreed to resume using its chips, the company lost an FTC case that alleged unfair business practices and has been ordered to renegotiate patent licenses. Qualcomm is appealing the decision and seeking a stay on the decision so it doesn’t have to immediately start those renegotiations.