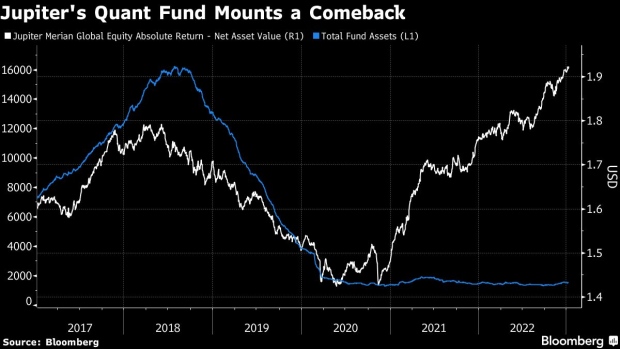 (Bloomberg) -- After enduring a 92% collapse in assets during the quant industry’s dark days, a onetime poster child for everything wrong with systematic investing is mounting a comeback.

And the manager of the once-$16 billion equity fund has a message for Wall Street peers hooked on the traditional strategies it once embraced: Ditch the old-school playbook.

On the back of inflation-driven market turmoil and newfangled tools like alternative data, the flagship vehicle for London-based Jupiter Fund Management is up about 29% in the last two years. It joins the swelling ranks of firms enjoying a big revival in factor investing, which picks stocks based on characteristics like how cheap they look or how their prices have moved.

But even as several well-established trades like value and quality rally anew, Jupiter’s quants reckon the days are numbered for peers who simply rely on the basic tenets of an allocation style that were largely forged decades ago, before the data deluge and computing advances of this era.

“If there’s one constant, it’s the cyclicality of those factors,” said Amadeo Alentorn, who took over as the lead manager of Jupiter Merian Global Equity Absolute Return Fund, or GEAR, in early 2022. “Proprietary factors, not generic factors, can help you remove a lot of that.”

The 44-year-old computational finance Ph.D. says factor investing has simply become too crowded and volatile, echoing a long-standing critique that was amplified during the so-called quant winter. It’s a lesson Jupiter learned the hard way, when assets in GEAR dropped more than 90% in about two years through to late 2020 — a period when Big Tech dominated the stock market and systematic strategies making more dispersed bets suffered.

Back then, GEAR was more focused on fundamental factors, but now it can cut its factor weightings significantly depending on prevailing conditions. Value, for instance, can be as little as 2% of the fund, Alentorn said. That compares to 40% when the models were first built.

Meanwhile, to capture forces missed by traditional factors, the team, which oversees $6 billion overall, has added new inputs based on research that started in 2019. These include the trading patterns of corporate directors, intel from earnings transcripts and changes in environmental, social and governance ratings. A signal that looks at fund flows, for instance, is intended to find stocks benefiting from hot investment trends regardless of rhyme or reason.

Those are nothing new in the systematic world, and their effectiveness can still decay over time thanks to crowding. Critics also argue they’re more likely to be false positives that lose their power in the long haul.

The GEAR fund, which now oversees $1.5 billion after drawing inflows last quarter, is far from alone in being buoyed by the factor comeback. The AQR Equity Market Neutral Fund jumped 27% in 2022 in its best year ever. The Vanguard equivalent surged 13% after gaining 23% in 2021.

Still, the tweaks to Jupiter’s flagship may be showing their potential. Gains for most in the factor industry largely coincided with rising bond yields last year, but have slowed as markets contemplate another shift in the cycle with inflation showing signs of peaking. GEAR has been outperforming peers over the past two months.

These new signals “tend to be shorter-term,” said Alentorn, who has been working on these models since 2005. “As we have seen, it’s not easy to exploit factors consistently, unless you really have a very long time horizon.”

The shift away from fundamentals is a significant step for Jupiter and GEAR. Originally launched in 2009 at Old Mutual Ltd., the fund historically followed traditional factors based on decades of academic work arguing certain stock characteristics always prevail in the long run.

That was still working in the first half of the last decade, helping GEAR become a juggernaut. But when cheap money abounded and Big Tech ruled in the three years through 2020, the fund lost 14% as its models bet on all the wrong horses.

GEAR went from peak assets of $16 billion in July 2018 to a low of $1.3 billion in 2020. As fees from the fund dwindled, its original home — Merian Global Investors, a buyout venture from Old Mutual — was sold to Jupiter in 2020. Alentorn’s predecessor, Ian Heslop, later moved to an advisory role.

Alentorn is optimistic that more gains lie ahead — as long as the market doesn’t return to the obsession with big-tech stocks that peaked with the pandemic.

“How markets wrestle with inflation expectations, with potential recession, now obviously with Covid being back in the news in China — all of those things should be good for uncertainty,” he said. “This is a great environment for us.”

--With assistance from Loukia Gyftopoulou.