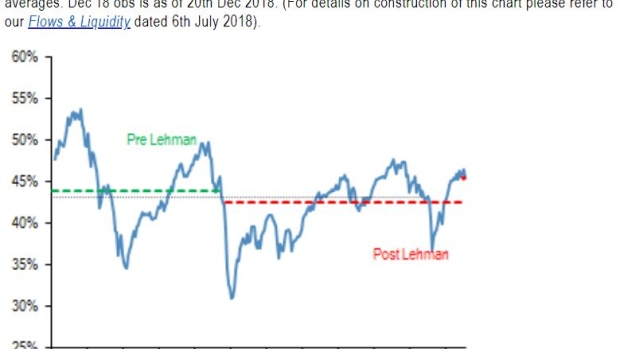 (Bloomberg) -- Wall Street quants that chase market trends have flipped decisively short against both the S&P 500 and the Nasdaq 100 for the first time since the pandemic hit, setting themselves up as a force that could intensify the rout.

As the S&P 500 flirted with a correction Monday, fast-money traders known as Commodity Trading Advisors were busy unwinding positions and accelerating the selloff, according to data compiled by JPMorgan Chase & Co.

It leaves them bearishly positioned against both the U.S. benchmark and the tech gauge for the first time since March 2020. Yet strategists say that this volatility-sensitive cohort is still far from capitulation -- raising the risk of further deleveraging feeding into future stock turmoil.

U.S. equities have endured a tumultuous start to the year as investors adjust to the reality of rising rates, the looming withdrawal of monetary stimulus and the threat of a war in Ukraine. The Federal Reserve’s policy statement Wednesday could offer important clues about the central bank’s first pandemic era rate hikes, a prospect that’s adding to waves of volatility.

“In the absence of a Fed dovish pivot tomorrow it would be difficult to see the market recovering simply because investors moved already to underweight positioning,” JPMorgan strategist Nikolaos Panigirtzoglou said.

While an index tracking a CTA strategy is up just 0.55% in January after a volatile few weeks, that’s far ahead of major stock gauges. Quants using the trend-following trade argue it’s well-placed to weather the current environment by riding ups and downs, and is one of the few proven ways to eke out returns when inflation is high.

CTA short signals are now established across all the major U.S. equity gauges, Charlie McElligott of Nomura Holdings wrote in a Friday note. Given the rapid shift in positioning by volatility-sensitive players there may now be space for a squeeze upward should the market stabilize, he said, but the big picture is a shift from “buy dips” to “sell rips.”

“There is undoubtedly a sense we are in a new-regime from the Vol-sense,” the cross asset strategist wrote. The current market “simply continues to de-risk excess accumulation of exposures built over a long-term period of Fed suppressed vol,” he said.

That could be one reason why so few on Wall Street seem ready to celebrate a “boomerang rally” that saw the S&P 500 ending in the green after falling about 4% earlier in the day. Futures for the gauge pointed to another drop at the open on Tuesday, with contracts for the Nasdaq 100 once again leading the declines.

“I do think we’ll see more volatility and probably lower lows,” said Matt Maley, chief market strategist at Miller Tabak + Co., in an interview with Bloomberg TV. “We’ve gone from a situation where on the near-term basis people need to sell the bounces rather than buy the dips.”

Back at JPMorgan, the team sees potential for trend followers to add to any more selling. Positioning among the cohort of roughly $340 billion of systematic investors fell to a -0.3 standard deviation, the lowest level since March 2020, they said. But a CTA “capitulation” is usually called when the standard deviation falls below -1.0.