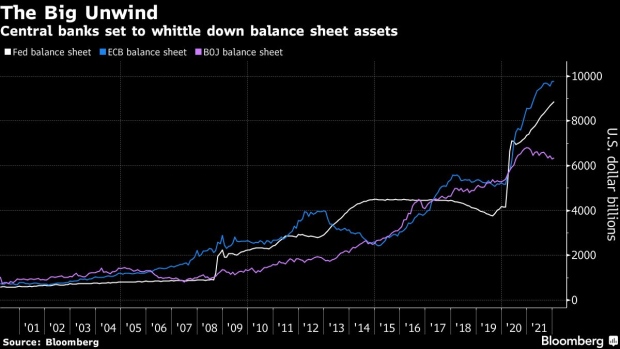 Jerome Powell’s hawkish pivot makes it clear that a key crutch of support for the global economy is going to be pulled away sooner than financial markets had been betting.

Counterparts are also ending or slowing the bond-buying which accelerated in the coronavirus recession with some even looking to reverse it.

The Bank of Canada last week signaled it could tighten monetary policy in coming weeks having ended so-called quantitative easing in October. Markets are betting the Bank of England will lift rates on Thursday to the level it has said it may begin shrinking its portfolio. The Reserve Bank of Australia is projected to announce an end to its bond buying program when it meets Tuesday.

All told, Bloomberg Economics expects Group of Seven central banks will add just $330 billion to their balance sheets this year, a sharp drop from the more than $8 trillion added during the pandemic in a bid to ease markets, contain borrowing costs and spur demand and risk-taking.

That lays the groundwork for the G-7’s combined portfolio to peak in the middle of this year at around $27 trillion, an amount that would have been unimaginable before the 2008 financial crisis when bond-buying became a key tool for most monetary authorities.

A key question is what does the exit from QE mean for the world economy. If it enables central banks to get on top of rampant inflation then it could help extend the recovery from the 2020 slump, especially if it acts as a substitute for higher benchmark rates.

But if the process ends up roiling markets it could have the opposite effect by cutting off the flow of credit to consumers and businesses, hitting their confidence.

“If central bank rates alone were increasing [rates], but quantitative easing was staying in place, this would provide at least some liquidity support to asset prices,” said Freya Beamish, head of macro research at TS Lombard. With the liquidity tide turning, “there is no cushion to fall back on.”

That sets the scene for a divergence as major central banks in the English-speaking world look not only to stop quantitative easing but begin quantitative tightening, the term given for shrinking balance sheets, while others keep on easing monetary policy.

Japan remains wedded to stimulus even as it slows the pace of its asset purchases and the European Central Bank is seen as being still more than one and a half years away from raising rates although it too is reducing net purchases.

Meantime China, which avoided QE through the crisis, has switched to stimulus mode to cushion the economy from a property slump.

While that’s a consolation, it hasn’t stopped financial markets from turning skittish about the pending withdrawal of liquidity. The MSCI World Index is already down 17% so far this year. Gaps between short- and longer-term bond rates have collapsed, with the U.S. Treasury yield curve at its flattest since March 2020.

Goldman Sachs Group Inc.’s financial conditions index -- a measure that incorporates variables like stock prices, credit spreads, interest rates, and the exchange rate -- has moved upward to reveal the tightest level since March. However, it’s still well below the extreme reached at the start of the pandemic as markets spiraled.

When the Fed started quantitative tightening in 2017, it had been raising rates for more than a year and it never directly sold assets, reducing its balance sheet by curbing reinvesting existing holdings of Treasuries as they matured.

Back then, Fed Chair Janet Yellen likened the process to “watching paint dry.”

This time, there is more concern about paring the balance sheet at the same time as rates are going up. QT could be announced in July or even sooner and the central bank could eventually sell some of the mortgage-backed securities it owns, according to economists.

“As demonstrated by past experience exiting extraordinary stimulus, taking away the punch bowl is less straightforward than adding to it.”

See here for the full report

Signs of a slowing recovery came last week when the International Monetary Fund cut its growth forecast for 2022, citing weaker prospects for the U.S. and China along with persistent inflation.