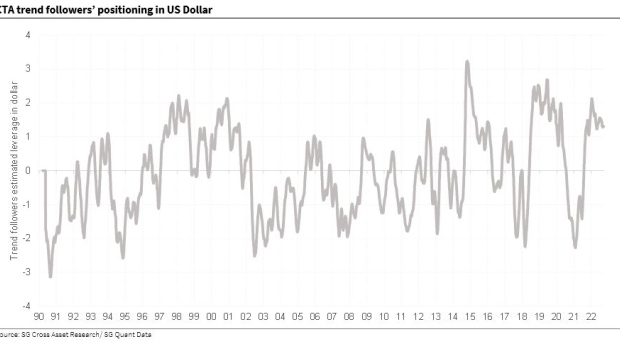 (Bloomberg) -- Wall Street daredevils betting that the historic inflation spiral around the world will soon die down have been wrong-footed all year.

But for one group of quants who make their money riding the prevailing trends on Wall Street, the market fallout continues to net unprecedented gains.

As the prospect of ever-larger Federal Reserve hikes sends the US dollar toward new highs and bonds to fresh lows, rules-based traders known as Commodity Trading Advisors are notching one of their strongest-ever months with a 6% advance in September alone, according to the latest data from Societe Generale SA. The systematic cohort, which take long and short positions in the futures market, are on track to close their best year on record, with a return of 36% so far in 2022.

In what’s likely shaping up to be the fastest monetary-tightening campaign in the modern era, CTAs are enjoying outsize gains after sticking to their big wagers against government bonds and stocks, while going long the mighty greenback against major currencies across the globe.

Take trend-follower AlphaSimplex. Thanks to the seemingly one-way inflation driver across investing styles, its Managed Futures Strategy Fund is up nearly 9% in September for a 47% year-to-date gain. That compares with heavy double-digit losses for long-only stock funds and balanced portfolios that are likely on course for their worst run since the financial crisis.

“We like macro uncertainty and there is a lot of it right now,” said Kathryn Kaminski, chief research strategist and portfolio manager at AlphaSimplex Group.

Hopes that the Fed may moderate its aggressive campaign of rate hikes in the face of a slowing economy have been snuffed out by a successive round of Fed officials touting their firm resolve to hike rates even at the cost of economic growth.

The resulting fallout has spurred a more than 5% drop in Treasuries in September and a more than 9% fall in global stocks while a Bloomberg dollar index has touched records.

“More than once over the past 12 months, markets thought we had reached peak central bank hawkishness, only to be painfully proven wrong,” said Nicolas Mirjolet, chief executive officer at Quantica Capital in Zurich, which runs $850 million of assets. “The current situation is an illustration of the fact that the most profitable trends are typically those that run for much longer than what the majority of market participants would believe.”

After posting a massive gain in the first five months of the year, a Bloomberg commodity index has plunged more than 15% in the past four months. While CTAs were previously riding the commodity supercycle -- spurred by the supply-side crisis and the war in Ukraine -- these fast-money quants have subsequently taken short positions, per SocGen data.

“Looking ahead, CTA funds are positioned for a continued tightening of financial conditions, being close to historically long the dollar and historically short in government bond futures,” according to Sandrine Ungari, head of cross-asset quant research at the French bank.

While 2022 is turning out to be their year, CTAs often misfired in the pre-pandemic era thanks to choppy market trends. The cohort may also be late to the party should a new regime shift emerge, such as a reversal in monetary tightening that sends investors rushing back to the safety of government bonds.

In any case, given the all-weather potential of the investing style, Greenwich, Connecticut-based AQR Capital Management sees plenty of opportunities ahead.

“Trend following tends to thrive in environments characterized by large market moves, positive or negative,” said Yao Hua Ooi, principal at AQR. “While a certain set of trades can drive strong performance for some time, new trends often develop in such an environment.”