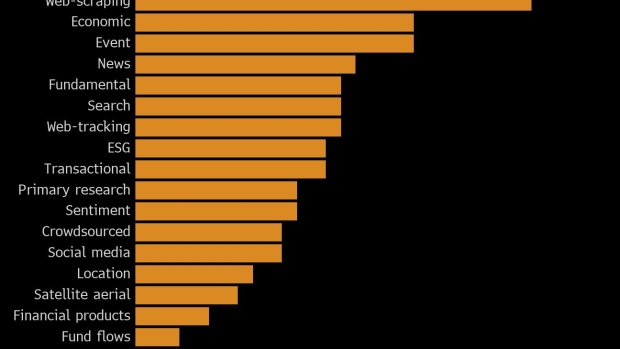 (Bloomberg) -- When the pandemic struck, George Mussalli used social media and Google searches to suss out which companies were gripped by a sudden collapse in sales.

By scraping bulletin boards for clues on staff morale, the quant at PanAgora Asset Management dug deep for high-frequency insights to navigate his strategies through the crash.

“We retooled areas of our model to give us more real-time data,” said the head of equity research.

Mussalli is far from alone. The decade-long boom in alternative data is reaching fever pitch on Wall Street as stocks notch the biggest price swings on record in the fastest economic collapse in modern history. All followed by a market rebound just as sharp.

But as newcomers invest their millions on everything from traffic-congestion statistics and job listings to credit card data, the journey from spreadsheets to trading is littered with hurdles.

Quant and discretionary practitioners warn pandemic markets are shining a light on two big pitfalls: Investing signals are hard to find in the noise and, when money mangers do strike gold, excess returns can vanish quickly.

“I’ve looked at probably 700 or 800 data sets over the last 10 years and about 90 to 95% of data sets tend to have basic evident biases to them,” said Qaisar Hasan, a fund manager at Lombard Odier Investment Managers in New York. “They don’t really deliver the claims the vendor has made.”

Like many of his peers, Hasan is using Apple and Google’s mobility statistics to help map the economic recovery as virus restrictions ease. But he warns those venturing deeper into the data world to tread carefully. A set of credit-card data might be skewed toward one demographic that isn’t receiving stimulus checks, or to a specific region of the U.S. which is unrepresentative of broader trends, for instance.

While lockdowns force the masses to use online services like never before, the race to convert all forms of consumer behavior into statistical gold -- and profit along the way -- is only intensifying.

But as the pandemic also reshapes liquidity, earnings and market functioning in one fell swoop, the intelligence harvested from alternative data may prove of modest importance at best.

“The end-value of a lot of data sets may be more marginal right now than it would be at other times,” said Chris Longworth, senior scientist at quantitative hedge fund Cantab Capital.

For instance, no one needs a satellite image of oil containers to know there’s a surplus this year. And Longworth’s own study shows the growing usage of aerial footage has barely improved analyst predictions of storage figures. Even getting the latter exactly right will only help you make the right bet on oil about half of the time.

“Having access to better data sources is only part of the picture,“ he said. “How you incorporate the data into your models and handle the uncertainty is just as important.”

Traders have a host of new statistics to choose from. Eagle Alpha, which connects vendors with buyers, projects there will be 5,000 data sets globally by year-end versus 1,200 on its platform currently. Bloomberg LP, the parent of Bloomberg News, provides clients with access to alternative data.

For hedge funds staking their high-fee proposition on returns untethered to the broader market, there’s a clear risk with the new torrent of commoditized statistics: By the time someone is talking about a new source, it’s already crowded.

“The fight for alpha is very fierce,” said David Khabie-Zeitoune, the chief executive officer at GSA Capital, a London-based quant hedge fund. “It’s still possible to find something that is relatively unexploited, but the expectation increasingly is that that will be exploited soon.”

It’s a cycle familiar to many investors.

In 2013, PanAgora’s Mussalli found that stocks recommended on Seeking Alpha, a popular website where investors share trade ideas, would enjoy a pop that lasted five days. It started trading on that signal with an automated system, only for the gains to shorten -- until it terminated the strategy altogether two years on.

That’s partly why Mussalli tends to be wary of data sets packaged by providers, complete with backtested strategies.

“The problem is: first, was that a fluke or was that real?” he said from Boston. “Second, is it going to be there after everybody’s using it?”

Even if the odds of success are uncertain, the tantalizing prospect of stealing a march on the competition means plenty of hedge funds are looking to up their game, despite budgetary pressures stemming from outflows this year.

Neudata, which advises the buy side on alternative data, has seen a bump in client queries and searches since Covid-19 started, CEO Rado Lipus said. One estimate puts spending on the industry this year at $1.7 billion, a sevenfold surge from just five years ago.

Part of its allure is the high-frequency signals, especially at a time when disagreements among sell-side analysts are at a record and official data are obsolete almost as soon as they are released. On Eagle Alpha, 59% of the data sets are updated daily.

The growing capacity of hedge funds to mine investing signals comes as the pandemic accelerates the shift to a digital world. A customer paying cash at their corner store can’t be traced, but one buying on Amazon can easily show up in a data set via email receipts and credit-card transactions.

In London, Aspect Capital credits a technology that scans the news and turns articles into a sentiment score for each asset for the swift bearish pivot of the systematic macro fund in the early days of the sell-off.

“If you got more data opportunities that are available more quickly with more granular updates and less lag, that’s definitely something you should take advantage of,” said Christopher Reeve, who heads up risk at the quant firm.

Over at RAM Active Investments, Tony Guida is experiencing the digital transformation first-hand this year, consulting his priest ahead of his wedding entirely on Zoom.

In his day job, Guida has been noodling on sentiment signals from blogs and social media for years. And even with the challenges, the quant has good news for new players wading into the industry: Alternative data is trumping more traditional signals in explaining market returns.

“Every data set -- especially alternative data -- is a small part potentially of a current truth,” he said from Geneva.