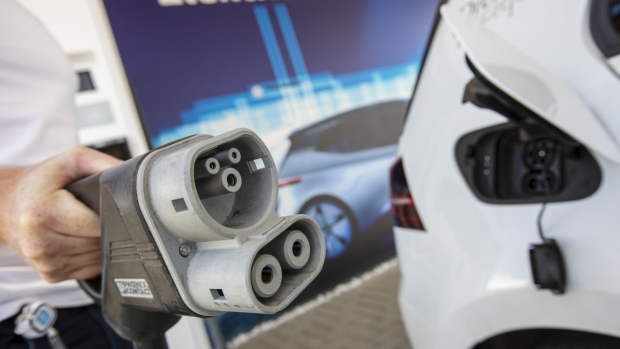 An employee holds a charger for a VW E-Golf at an electric charging station in front of the Volkswagen AG automobile manufacturing plant in Zwickau, Germany, on Monday, June 17, 2019. VW will spend 1.2 billion ($1.4 billion) retooling Zwickau to make a half-dozen electric models by 2021 but it warns that the payroll is likely to shrink. Photographer: Alex Kraus/Bloomberg , Bloomberg

QuantumScape, which counts Volkswagen AG as its biggest shareholder, is among a group of companies developing solid-state batteries, which could dramatically speed up EV adoption by providing a safer, cheaper alternative to current lithium-ion batteries. It has benefited from booming investor interest in electric cars and the technology needed to make and improve them.

While the technology has cleared some technical hurdles, QuantumScape still has a long way to go to demonstrate it can manufacture its new battery at scale. The company said in February it produced four-layer cells, a crucial step in taking the technology to the real world.

The announcement Tuesday marks another step forward in the process, though QuantumScape said it will disclose more testing data later this year.

“While we need to produce and test many more such cells to collect data and statistics on their performance and reliability, this is an extremely important result,” the company said in a letter to shareholders.

In the steps toward commercialization, QuantumScape will also have to show testing on larger battery formats, which is closer to what automakers use for mass assembly of vehicles.

Shares of the San Jose, California-based company were little changed in extended trading after the announcement. They have been pummeled this year, plunging 75% through Tuesday as short sellers targeted the company. The stock is now worth a sixth of its December peak of $132.73.

In March the company raised about $463 million, less than initially sought, to fund expansion of a pilot battery production line in California and a separate line it’s building with Volkswagen as part of a 50-50 joint venture. The latter is supposed to start producing cells as soon as 2024.