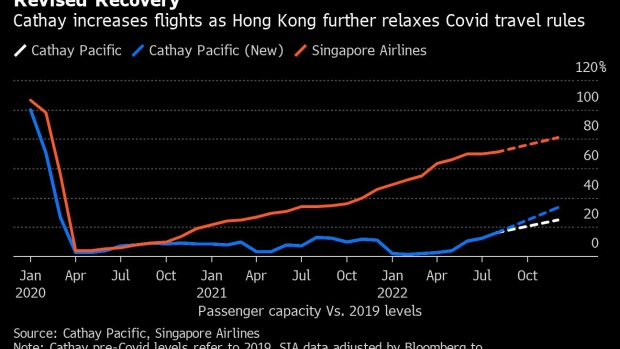 Travelers in the departure hall at Hong Kong International Airport following the government's scrapping of its hotel quarantine regime in Hong Kong, China, on Monday, Sept. 26, 2022. Hong Kong's dismantling of hotel quarantine for arrivals is being met by calls for the city to remove remaining travel restrictions to help bolster its fortunes as an international financial hub. , Bloomberg

(Bloomberg) -- Hong Kong’s dreaded Covid quarantine policy may be gone, but don’t expect a return to the good old days of travel any time soon. Although millions of people stuck in the Asian financial hub since early 2020 are desperate to get out, there simply aren’t enough flights to meet demand.

The number of available seats and flights this month is only about 18% of what it was in October 2019, when travel to and from Hong Kong was already adversely impacted by mass protests. Some 45 airlines are showing scheduled flights to the city in October, half the number versus three years ago.

Hong Kong’s main airline, Cathay Pacific Airways Ltd., has said it will take time to rebuild capacity as it brings back grounded planes and trains its workforce. The carrier has nine flights a week from Hong Kong to Taipei in October, data from Cirium show. That was 93 before the crisis, when it was one of the world’s busiest international routes.

Short-haul trips in Asia are the most popular options for Hong Kong residents looking to escape, according to Trip.com, which saw a nearly 400% increase in outbound bookings the weekend after the plan to drop quarantine was announced. Still, Cathay is only flying to Bangkok 14 times a week versus 63 before the pandemic.

Fares have also soared due to the limited availability and with no direct flights to many destinations such as Johannesburg, Adelaide, Colombo and Chicago, journeys are longer.

Airlines could take another six to nine months to reorganize flight schedules, said Yolanda Yu, vice-chair of the Board of Airline Representatives of Hong Kong. Yu is also Air New Zealand Ltd.’s manager for Hong Kong and the Philippines.

Cathay’s slow rebuild reflects how Hong Kong still has a long way to go to reclaim its position as an aviation hub. While the government has finally prised open the border, the city’s welcoming reputation for international travelers has been deeply scarred by its strict Covid policies.

And the virus still looms large in Hong Kong. Arrivals are subject to rounds of Covid testing and can’t visit venues such as bars and restaurants within three days of landing. Mask wearing is compulsory in most places. There’s also the fear authorities might clamp down again.

“You’re not going to get a recovery to normal behavior while these restrictions are in place,” International Air Transport Association Director General Willie Walsh said at a media briefing on Sept. 27.

In the first eight months of 2022, Hong Kong’s airport handled just 3.5% of the passengers it did before Covid, and 30% of flights. Only a few foreign carriers have announced plans to resume or increase services between now and the end of the year. They include All Nippon Airways Co., British Airways Plc and Deutsche Lufthansa -- but all at reduced levels.

Here’s a deeper look at some of the key reasons behind the slow rebound.

Cathay’s workforce peaked in 2019 prior to the pandemic, with 27,300 permanent staff, including pilots, crew and airport check-in workers. That number had fallen to 16,200 by the end of June, the lowest since 2005. The company plans to hire 4,000 frontline staff by the end of 2023, taking it closer to 2009 levels, but still way off the immediate years before Covid.

Cathay’s pilot numbers, meanwhile, shrank by almost a third through the pandemic, from 3,335 to 2,410 as of the third quarter this year. Another 500 pilots were cut when the company shuttered regional unit Cathay Dragon. The airline is hiring 700 pilots by the end of 2023 to replenish its ranks, including 300 experienced hires. The other 400 will be newly qualified cadet graduates working as second officers who can only operate aircraft in cruise and aren’t permitted to take off or land.

With Cathay operating at only 2% of typical capacity during much of the pandemic, its aircrew need to update their pilot licenses after so long away from the cockpit. Aircrew can’t fly unless they’ve completed three take-offs and three landings in the preceding 90 days, including in a simulator.

“We currently have many aircrew who need to renew the validity of their licenses,” Cathay spokeswoman Carolyn Leung said. “This takes time to address adequately even after the lifting of all operating constraints.”

Grounded Planes in the Desert

Cathay is recalling several dozen grounded planes, many of which have been parked in Alice Springs in the Australian desert for about two years. Of the 228 aircraft in its fleet, 69 were still there at the end of June. It takes four weeks of “solid” work to reactivate grounded planes, Cathay said recently.

“Returning the aircraft to Hong Kong actually is even more difficult because they have not been flying for so long, which means we will have to do a lot of tests and tasks to ensure they are in a safe condition before they take on the next journey again,” Pearl Sau, Line Maintenance Operations Manager, said in a video in July.

Major European airports such as London Heathrow ordered airlines to cut flights because they were unable to cope with a sudden revival of travel over the busy summer. With fewer staff to process passengers, scenes of long queues became common. Cuts to services and daily passenger caps have make it harder to restart flights to destinations like Hong Kong.

“They have been unable to do the basic job that an airport is required to do, which is to provide adequate staffing at security checkpoints,” IATA’s Walsh said. “Restricting flights because you don’t have enough people to do security checks, it’s terrible to see the damage done because of this.”

The aviation industry is having a harder time recruiting following the pandemic, when thousands were put out of work and concern mounted about longer-term job security. Data from Eurostat show that 320,000 people worked in air transport across the European Union as of the first quarter of 2022, the lowest in 14 years after a slump in younger workers.

Airlines flying between Europe and Hong Kong face detours of as long as four hours to avoid Russian airspace, which has been off limits since the invasion of Ukraine. Finnair Oyj was a popular option for Hong Kong flights to Europe, with two daily services between the city and Helsinki flying over Siberia. Finnair currently flies the route only twice a week.