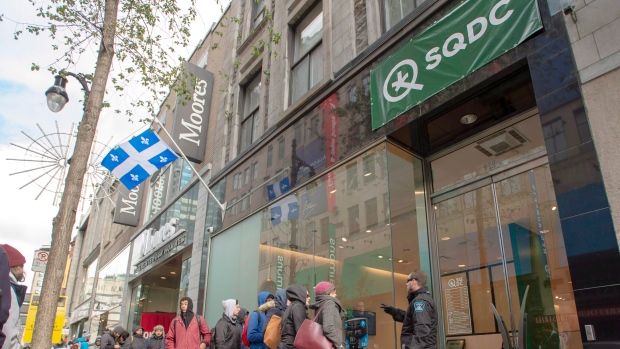 Customers lineup at a government cannabis store Thursday, October 18, 2018 in Montreal on the second day of the legal cannabis sales in Canada. , The Canadian Press

MONTREAL -- Quebec's provincially operated cannabis shops made $71 million in sales in their first year and sold the most cannabis in the country in terms of dollars and volume, but they still posted a $4.9-million loss to be covered by the provincial government.

The provincial cannabis corporation -- known as the SQDC -- said in a statement that the provincial government revenues from consumption and excise taxes totalled about $21.7 million between June 12, 2018 and March 30.

The first stores in the Quebec network opened on Oct. 17, the day recreational marijuana became legal in the country.

However, the stores had to reduce opening hours, plagued by supply challenges faced by all provinces no matter what business model they were employing.

By the end of the fiscal year, Quebec stores were open five days a week, and now stores are open seven days.

"Despite the supply issues and its scaled-back expansion plan, the SQDC estimates, based on Statistics Canada data, that during its first months of operation, Quebec was the province with the highest sales in Canada in dollars as well as volume," the agency reported.

The Crown corporation said net expenses totalled $18.1 million, which included non-recurring start-up costs of $4.9 million. Without that one-time cost, the SQDC would have ended its fiscal year breaking even.

The SQDC says it expects to become profitable in the current fiscal year.

Store sales totalled $57.6 million -- roughly 8 tonnes of cannabis. People spent an average of $51.07 per transaction in store, and there were 1.3 million total transactions.