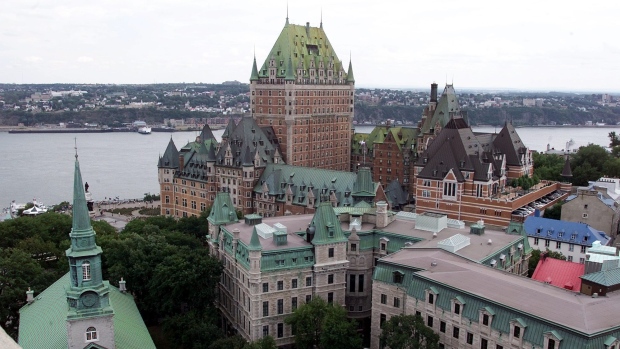 The Chateau Frontenac hotel, the Quebec Ministry of Finances and the Cathedral of the Holy Trinity, downtown Quebec City, Monday Aug.26, 2002. , The Canadian Press

Quebec City is the best place for Canadian millennials to settle down in, according to a new survey.

A study released by Point2Homes on Monday ranked Quebec’s capital as the top millennial hot spot in the country ahead of some of Canada’s smaller cities, including second-ranked Victoria, B.C. and fourth-ranked Halifax.

The study ranked Canadian cities using a variety of criteria including yearly income for millennials, average home prices, life satisfaction, and the percentage of the city’s population made up of millennials, among other factors.

The surprising entrant in the top five was Guelph, Ont., located one hour west of Toronto, which placed third overall. Its ranking was buoyed by high rankings for life satisfaction and health care.

Four of Canada’s five most-populous cities placed outside the top five, with only Ottawa cracking that group (placing fifth). Vancouver placed next-highest among them in 10th spot, Calgary ranked 15th, Toronto was 24th and Montreal finished in 38th.

Of the 85 cities eligible for the rankings, Langley B.C. finished last. Kawartha Lakes, Brantford and Sault Ste. Marie, Ont. were also among the bottom five alongside Chilliwack, B.C.