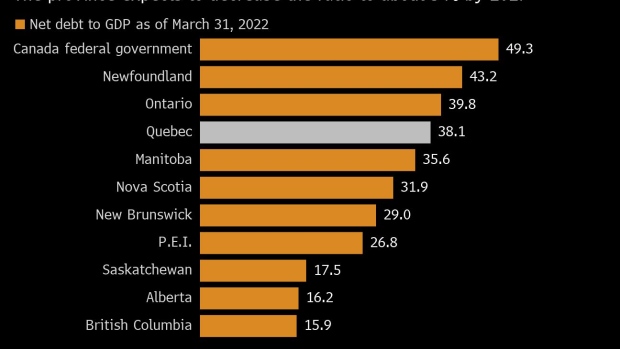 Higher interest rates will take a bigger bite out of Quebec’s budget in the years ahead. Canada’s second-largest province has watched the average cost of new debt increase to 3.8% this fiscal year from 2.37% a year ago, the government said in documents released Thursday as part of Finance Minister Eric Girard’s financial update.

Debt service costs are projected to jump to C$11.2 billion ($8.2 billion) in fiscal 2026-27 — consuming almost 7% of provincial government revenue — from C$8.6 billion in the fiscal year that ended in March.

“The rise in rates brought a new vigilance, bringing us to contain our financing programs, our level of debt and therefore reduce our deficit,” Girard said in an interview.

Despite having more debt than most other Canadian provinces, Girard is forecasting an improvement in Quebec’s fiscal situation, allowing it to trim debt to about a third of gross domestic product by 2027.

“Quebec’s net debt is still high as a share of nominal output compared to its peers but the ratio remains on a steady downward path,” Laura Gu, an economist at Bank of Nova Scotia, said in a report.

Quebec has mostly borrowed at longer maturities this year, with 86% of new debt issued at 10 years or more.

Girard, 56, a former treasurer at the National Bank of Canada, deflected questions on whether he’s spending too much in his fiscal framework, given the economic uncertainty and high levels of inflation.

With a fiscal package it’s calling an “anti-inflation shield,” the government will distribute billions of dollars via a richer tax credit for seniors and checks of C$400 to C$600 each to 6.5 million citizens.

“The unexpected inflation will bring C$14 billion more in revenue over the next five years,” Girard explained. “We are giving back C$13 billion to Quebeckers.”

The government also promised to reduce tax rates on the lowest income brackets next year and will be pressured to increase wages for civil servants. Despite all economic headwinds, the minister remains confident, expressing no worry about credit raters.

“Agencies want to see we have a plan to return to balanced budgets,” he said. Quebec projects it will run an operating surplus of about C$1.7 billion in fiscal 2023-24, after debt charges but before a deposit of nearly C$4 billion in its Generations Fund, a tool aimed at reducing debt.

“My favorite word in English is stewardship, which means taking care of what has been entrusted to us,” the French-speaking minister insisted.