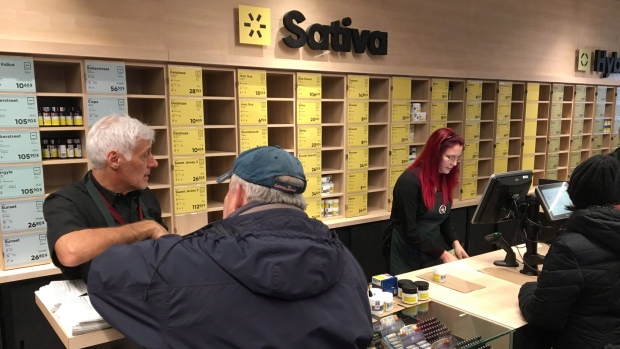 MONTREAL -- Quebec will have the toughest age restrictions on cannabis in the country starting next year, but many are warning the tougher measures won't have the desired effect the provincial government is trying to achieve.

The Coalition Avenir Quebec government used its majority in the legislature to raise the age limit to consume cannabis from 18 to 21, passing a bill at the national assembly on Tuesday to bring about the strictest rules in the country.

The federal law sets the minimum age at 18 but leaves it open to provinces and territories to establish their own rules. The legal age for consumption is 19 in every other province except Alberta, where it's 18.

Lionel Carmant, the province's junior health minister, said the change is about protecting youth and sending a message that consuming cannabis is not a trivial matter.

But the tightening of age restrictions has plenty of detractors -- opposition members of the legislature voted against the bill as shortsighted, while public health and industry representatives said they were disappointed the provincial government forged ahead despite their concerns.

Critics have long held that the age restrictions will only drive younger users to the black market.

"It starts from a good intention, but it's really a bad policy," said Jean-Sebastien Fallu, a researcher specializing on drug abuse and addiction at the Universite de Montreal. "Protecting youth is a good thing but this bill won't protect youth, it'll in fact increase many health and social risks for youth because they are going to access cannabis anyway -- they always have, they always will."

Fallu called the move a populist measure that perhaps some citizens are behind, but he believes they are misinformed by the government itself.

He noted that at 18, one is legally considered an adult and can make decisions on other potentially risky behaviours such as buying a home, getting married or -- in some provinces, at least -- buying alcohol.

The Quebec Cannabis Industry Association, which represents more than 25 of the province's licensed growers, said the move goes against the goals of legalization: improving public safety and getting rid of the black market.

A spokesman for the association said while it's sympathetic to the government's stated desire to mitigate the risk to younger brains, pretending those consumers won't use at all is far-fetched.

"It's totally against the stated goals of the Quebec and federal government, which was to control access to the substance," Francois Limoges said.

Limoges said the association plans to continue lobbying the government on the matter.

Gabriel Nadeau-Dubois, a co-spokesperson for the opposition party Quebec solidaire, accused the government of creating two categories of adult -- those 21 and older and those from 18 to 20.

"It's a paternalistic approach towards young people in Quebec," Nadeau-Dubois said.

The province is one of two jurisdictions where home cultivation is forbidden, along with Manitoba.

Federal law allows Canadian citizens to grow up to four cannabis plants at home, but Quebec chose in June 2018 to legislate against home cultivation entirely.