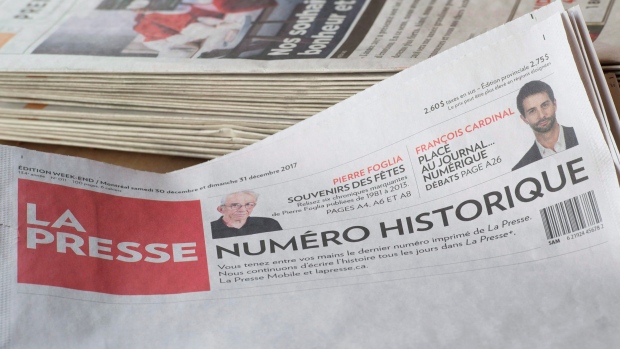 A copy of the final print edition of the French language newspaper La Presse is shown at a coffee shop in Vaudreuil-Dorion west of Montreal, Saturday, December 30, 2017. , THE CANADIAN PRESS/Graham Hughes

QUEBEC -- The Quebec government is giving the province's print media a financial boost to help it confront the unprecedented crisis facing the industry from the rise of digital competitors.

Media companies will be able to claim a refundable tax credit equal to 35 per cent of employees' salaries over five years to give them financial leeway while they seek a new business model.

The measure announced Wednesday retroactive to Jan. 1 is valid for newsroom employees earning up to $75,000 a year.

The announcement made by Finance Minister Eric Girard and Culture and Communications Minister Nathalie Roy follows a recent parliamentary commission on the future of media and the forced sale of six newspapers of Groupe Capitales Medias, a cash-strapped French-language newspaper chain that filed for creditor protection in August.

For the past decade, the print media has faced a rapid decline in subscriptions and advertising revenues, which migrated to web giants such as Google, Amazon, Facebook and Apple.

Quebec is also extending for one year to Dec. 31, 2023 the tax credit available to support the digital transformation of print media. Some existing government support programs from the Ministry of Culture and Communications will also be extended for two years until 2023-2024.

The provincial government also heeded the call of media owners to remove the recycling tax paid to municipalities for curbside recycling.