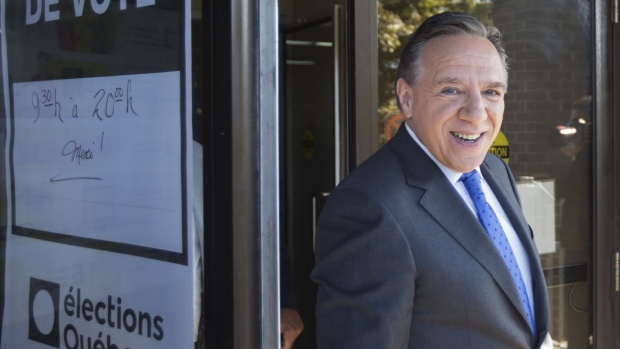 Francois Legault, leader of the Coalition Avenir Quebec party, exits a polling station after casting a ballot in L'Assomption, Quebec, Canada, on Monday, Oct. 1, 2018. Quebeckers go to the polls Monday to decide whether to try a new political party for the first time in nearly four decades, with the province's dairy industry suddenly under threat. , Bloomberg

(Bloomberg) -- With high vaccination rates and a strong economic rebound on his side, Quebec Premier Francois Legault outlined post-pandemic measures ranging from adding 37,000 day-care spots to creating a cybersecurity ministry.

“I’m more confident than ever since the start of the pandemic that the worst is behind us,” Legault said in a speech in Quebec City Tuesday marking the start of the parliamentary session. “I’m convinced that it’s now time for Quebec to project itself into the future.”

The 75-minute speech struck an optimistic tone contrasting with the early days of Covid-19, when thousands of deaths in long-term care facilities put Quebec at the epicenter of the crisis in Canada. Now, with one year left before provincial elections and sanitary restrictions progressively lifting, polls show Legault’s party trouncing rivals.

Many of the measures announced Tuesday would take more than a year to implement. Legault’s pledges included training workers for thousands of vacancies in construction and IT, helping companies boost productivity, pressuring family doctors to take on more patients, and supporting families that can’t afford rising housing and grocery costs.

Still, he resisted calls to boost immigration, saying the Canadian system must respect Quebec’s ability to integrate newcomers and protect the French language.

“Quebec cannot have the same immigration model as English Canada,” he said. “The survival of French demands a different approach.”