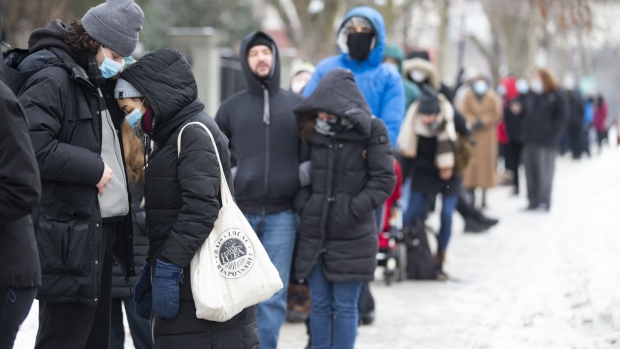 Quebec, the COVID hot zone of Canada once again, is resorting to a curfew and adding another round o

Quebec, the COVID hot zone of Canada once again, is resorting to a curfew and adding another round of restrictions to stem fast rising hospitalizations.

Starting Friday, residents of the mostly French speaking province will need to stay home from 10 p.m. to 5 a.m., Premier Francois Legault said at a news conference Thursday. Restaurants will close, private indoor gatherings will be banned, and schools will only reopen from the winter break on Jan. 17 as the omicron variant pushes infections to records.

“Over the next weeks, there is a risk that the number of hospitalizations surpass our capacity,” Legault said. “If there is something I learned since the start of the pandemic, it’s that we must act quickly.”

The province, traumatized by hundreds of deaths at long-term care facilities at the onset of the crisis, implemented some of the toughest measures in North America over the past year, including a five-month long curfew. Thursday’s decision, which comes on top of restrictions added over the past 10 days, put it back in that spot.

New infection records get broken every day: There were 14,188 new cases in the last 24 hours. And that’s an underestimate because people increasingly turn to rapid tests at home, which don’t get reported to the government.

Most worryingly, hospitalizations have doubled in a week to 939, Legault said, adding he made the decision on further restrictions after meeting with experts the previous night.

While Quebec is taking the most drastic measures, the rest of Canada is also grappling with the omicron variant.

Ontario, Canada’s most populous province, said Thursday it will reserve publicly funded COVID-19 PCR tests to vulnerable residents as it can’t keep up with record infections.

It also lowered capacity at indoor spectator venues and allowed those in long-term care and retirement homes to get a fourth dose of vaccine. In British Columbia, the return to school for most students was pushed back to Jan. 10.