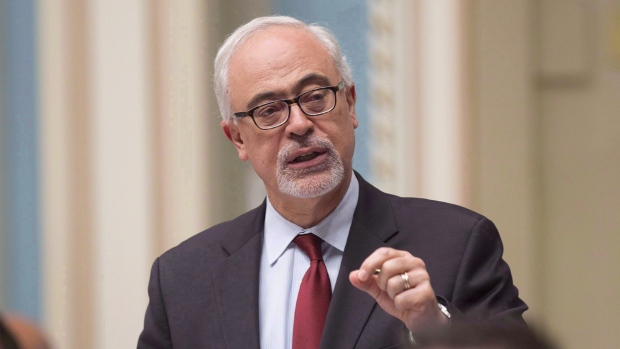 Former Quebec Finance Minister Carlos Leitao responds to the Opposition during question period on May 30, 2017 at the legislature in Quebec City , The Canadian Press/Jacques Boissnot

The province's strengthening economy was the subject of numerous questions at a conference last week that brought together American investors interested in learning more about Canada's potential.

"We are doing well, by the way — very well," the beaming finance minister told the experts who gathered for the event, which was hosted by Bloomberg.

There were clear signs in the crowd that Quebec's encouraging economic performance over the last year or so has reverberated south of the border. In the past, the province might have been overlooked because of its sluggish economy and fears over the prospect of another referendum on independence.

Many in attendance probed for more information about Quebec — they discussed it inside the conference room and later over chicken at the networking lunch. Several even pressed a Canadian Press reporter for more details on the province.

Their queries touched on a wide range of topics: the staying power of the surging economy in Canada's second-largest province, its impressive run of job creation, the strength of the Montreal housing market, the city's tech sector and the fact there's been less talk of late about independence.

The event's participants specialize in fixed-income investments, such as the bonds offered by Canada's federal and provincial governments.

On stage, Leitao told his audience how Quebec's growth had accelerated through 2016 and into 2017. He predicted it would continue because it had been led by a consumer-driven expansion fuelled by rising incomes — not ballooning debt.

"This is growth funded by income gains, which makes it much more sustainable," Leitao said.

Earlier that morning, fresh numbers showed that Quebec's real gross domestic product — a measure of economic growth — expanded at a robust annual rate of 2.5 per cent in the second quarter.

The real GDP reading marked Quebec's sixth straight quarter of growth above two per cent, the province's longest run since 2007, said a research note by the National Bank.

Later in the week, TD Economics said in a note that "Quebec has been firing on all cylinders" with growth projected to come in at just under three per cent for 2017 — its fastest pace since 2002. TD also noted how the province's unemployment rate fell to a record low of 5.8 per cent in July, before rising to 6.1 per cent a month later.

However, the analysis by National Bank senior economist Matthieu Arseneau pointed out that the province's first-quarter growth was  revised downward last week to 2.8 per cent from 4.3 per cent. He also pointed out that business investment fell 1.2 per cent in the second quarter.

As next year's provincial election approaches, Leitao also said the government would continue to reduce the tax load on the so-called middle class and would likely deliver a second-straight budget surplus in 2016-17. Eventually, he suggested a third surplus could be posted for the current fiscal year.

One senior official from a big U.S. investment firm, who spoke on condition of anonymity because they were not authorized to speak publicly about the company's views, said it was encouraged that it had heard less talk about another referendum on independence in Quebec.

Later in the day, the audience heard a panel of Canadian-based experts who compared Quebec with the bigger provincial economy next door: Ontario.

Chris Kresic, a partner and portfolio manager of fixed income for Jarislowsky Fraser Ltd., told the conference that Ontario was more exposed to high household debt than Quebec, in large part because of its hot housing sector.

"[It] could result in Ontario looking weaker in a relative sense," Basdeo said of the two provinces in an interview after his appearance.

He added that the higher-rate potential, combined with Ontario's plan to gradually increase the minimum wage to $15 an hour, could be a problem for future growth.

Ontario Finance Minister Charles Sousa also appeared at the conference to make the pitch on behalf of his province.

Sousa argued that Ontario played a role in helping Quebec.

In a later interview, Sousa credited the Ontario economy for its ability to withstand shocks over the years, its fiscal stability, low unemployment, infrastructure investments and measures introduced last year aimed at easing risks in the housing market.

When asked about Quebec, Sousa said he had heard more talk about it.

"Quebec and other provinces — their prosperity, their improvement, is good for all of us," Sousa said.

He also said that Ontario had provided billions of dollars in indirect support for Quebec through the federal equalization program.

"I'm encouraged by Quebec's ability to come to balance. That's important. Of course, Quebec benefits from transfer payments from the federal government that Ontario doesn't get. We're a net contributor to the federation, always have been, even when we qualified for equalization."